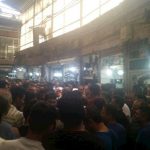 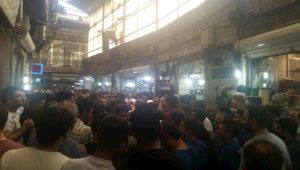 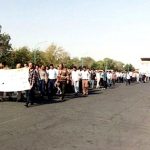 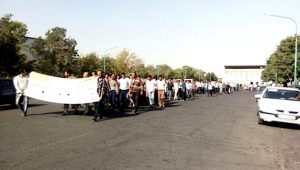 Merchant’s strike in Tehran protesting the decrease in value of rial versus dollar.

Merchants in Tehran and other cities in Iran went on strike on Monday, July 29th, in protest of the steep plunge of the rial and the increase of the dollar after the morning’s trading. The merchant’s strike comes at a turbulent time in Iran. Truck drivers and railway workers in Iran are both currently engaged in widespread protests as well, and the country has been in a constant state of protest since the uprising began last December.

On Tuesday morning, a large group of truck drivers, shop owners, and citizens and youth from the city of Isfahan marched in protest of skyrocketing prices, repeated power outages, and human rights violations by regime officials in Isfahan’s industrial district. Shopkeepers have closed their stores as part of the protests.

Repressive forces are on the scene, with anti-riot units stationed along different streets to disperse the protesters and prevent the demonstration from growing in size.

Meanwhile, merchants in Tehran have been on strike since Monday. The regime, fearing that the protests would spread, positioned police, IRGC and plainclothes mercenaries to suppress the strike, where they proceeded to threaten and intimidate the store owners. On Tuesday, several merchants in the bazaar who refused to re-open their stores were arrested, as were a number of money changers.

Mrs. Maryam Rajavi issued a statement of support to the striking workers on Tuesday, urging them to continue their fight. Her statement read:

I salute you all for rising up again and resuming your strikes against the usurper clerical regime.

The uprising which started last December is continuing to carry on thanks to the efforts of our people across the country, from Kazerun to Isfahan, Khuzestan and Baneh, from truck drivers and truck owners, to the workers of Haft Tappeh Sugarcane factory and the Steel Factory of Ahvaz, and merchants of bazaar in various cities. Today, the bazaaris and the truck drivers and owners echo the voice of the Iranian people against the mullahs’ destructive rule.

The disastrous state of the economy and the foreign exchange market is the direct product of the regime’s depravity. The free fall of the value of Rial to the world’s lowest is a consequence of the rule of the mullahs who have destroyed everything to preserve their power.

It is the consequence of squandering Iran’s wealth and revenues on the criminal war in Syria, and on export of terrorism and fundamentalism to other countries.

It is the consequence of the devouring of the greater portion of Iran’s economy by Khamenei, the IRGC and state-backed foundations, which has left no business opportunity for bazaar merchants and has put the lion’s share of Iran’s consumers market at the disposal of major shopping centers owned by the IRGC and other regime factions.

The mullahs have no solution for containing this chaotic situation and all of their measures and plans have failed. Sacking the Central Bank’s president, arresting bazaar merchants, spreading lies and false pretenses are no longer effective. Iran’s crumbling economy cannot be saved unless by toppling the regime.

Expanding the protests to bring down the corrupt regime of theft and destruction is the only solution.

I urge the valiant youth of Iran and the resistance units to support the strikes of bazaaris.

As Massoud Rajavi said, “The people of Iran are the ones who have the final say, with their arisen resistance units, the revolting cities, and the National Liberation Army.”

The MEK supports the merchants, truck drivers, railway workers, steelworkers, and those who are without water and electricity in their protests against the corrupt Iranian regime. These are the protests of today. Tomorrow, the MEK will support the farmers who cannot irrigate their crops, the teachers who have gone unpaid, and the religious minorities who are denied due process. As long as the clerical regime exists, the MEK will support those who protest its policies and will fight to end its tyrannical rule. We agree with Mrs. Rajavi that the only solution to end the corrupt regime is to expand the protests.