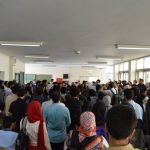 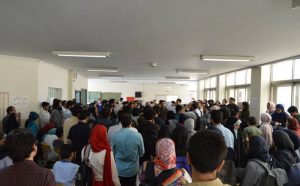 On July 23rd, 68 student associations in Iran released a statement criticizing a number of harsh verdicts against students that have recently been handed down by regime courts. The student associations warned that they will not allow “the totalitarian forces to target freedom and liberty again.”

According to the statement, the harsh sentencing of student activists is creating a “myriad [of] dissatisfaction among people.” The statement also warned that the regime’s “authoritarian rhetoric toward justification has directed the country to a precarious route.”

A previous statement was issued by 63 student associations and contained many of the same demands. According to the statement, the “totalitarian elements” did not address any of their concerns and instead retaliated against the student activists. They cited the sentencing of student rights activist Fereshteh Tousi as evidence of their claim.

Tousi, a 30-year-old student at Allameh Tababa’i University, was sentenced to 18 months in prison for organizing a ceremony to commemorate National Student Day at her university’s campus. She was convicted of “propaganda against the state” by a court in Tehran and sentenced on July 3rd.

The Iranian regime has repeatedly repressed any dissent among its people, no matter how peaceful.

On July 21st, Human Rights Watch released a statement saying that regime authorities have stepped up their crackdown on peaceful student activists with harsh prison terms and restrictions. Their statement cited in eight cases similar to Tousi’s in 2018 alone.

Sarah Leah Whitson, Middle East director at Human Rights Watch, said: “Instead of enabling a safe environment for peaceful activism, Iranian authorities have gone back to their favorite response: cracking down on peaceful dissent. While encouraging students to participate in public discourse, the authorities in practice prosecute them for peaceful assembly.”

Since the uprising began last December, the regime has taken desperate measures to suppress the people. Many of the protesters that are still in regime’s dungeons face more serious pressure for their affiliations to the MEK, shooting protesters in the street, as well as harshly sentencing student activists. The following are some examples of harsh sentences of student activists that have been handed down since the uprising began:

Since March of this year, more than 100 university lecturers and dozens of student associations have called upon regime President Hassan Rouhani to honor his promise to safeguard student rights. He has failed to take any action to help students, showing once again that he is not a moderate as he and his supporters claim.