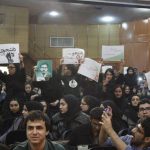 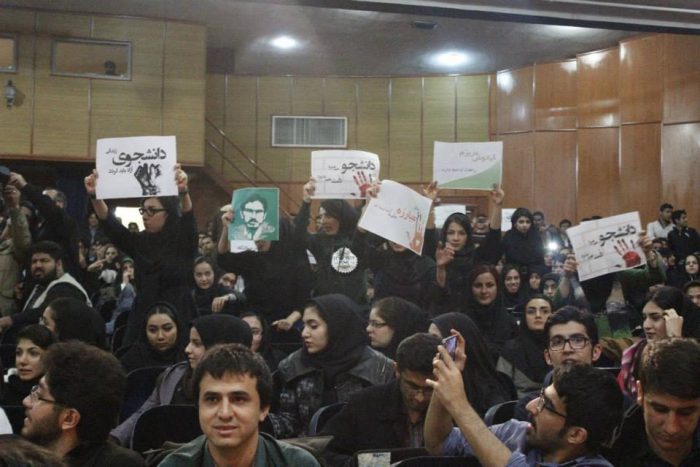 On Tuesday, students at a number of universities in Iran protested the suppression of students. The protests, which occurred prior to the upcoming Student Day this Friday the 7th, involved students from Tehran Polytechnic University, Tabriz Sahand University, Babol Noshirvani University, among others.

According to MEK sources in Iran, protests in Tehran turned violent as students clashed with Basij forces who had been dispatched to suppress the demonstration. Despite the regime’s attempts to prevent the protests, the students from Polytechnic University continued with their rally, chanting: “Imprisoned workers must be released!”

“Imprisoned students must be released!”

“Real teachers should be released!”

“Death to this deceitful government!“

Students from the Faculty of Social Sciences of Tehran Allameh University, Kermanshah Razi University, and Sirjan University of Medical Sciences used the upcoming Student Day as an occasion to protest the regime and its acts of suppression toward university students. The students from Kermanshah Razi University also protested in support of teachers and workers who have participated in the growing strike movement this year. They chanted: “Student, Worker, Teacher, United, United!”

“Teachers are in jail from Khorasan to Tehran!”

The following day, students at Semnan University of Medical Sciences turned a visit from regime President Hassan Rouhani into a protest. When Rouhani entered the university hall, a group of students chanted, “Inflation, high prices, you, Rouhani respond!”

“Student would rather die than accept this humiliation!”

After colleges students across the country voiced their support Ahvaz workers, these protesters are chanting:
"Students, workers, unite, unite" pic.twitter.com/rExN6MlbNJ

This is only a single example of a policy at one university. Iranian universities are governed by policies and laws meant to repress students and prevent them from expressing independent thoughts or actions. The mullahs hope that by limiting freedom on university campuses, they can stop the youth of Iran from rising up against the theocracy that oppresses them. It is becoming clear that the opposite is true.

The youth of Iran are a large part of the ongoing uprising that is taking place among all sectors in the country. The MEK and the Iranian Opposition are working to organize and lead this massive movement to overthrow the corrupt regime and restore democracy to Iran.