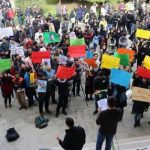 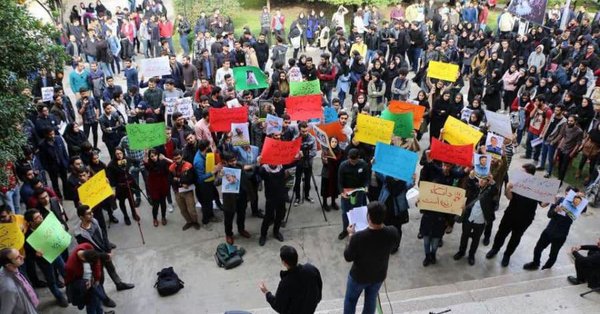 Widespread demonstrations in universities across Iran, on Student’s Day

Students at a number of universities in Iran protested over the days surrounding Student Day on December 7th. The protests began on Monday, December 3rd, and have yet to end, despite a number of repressive measures by the regime.

#Iran Dec 10
The students of Khomeini International University (IKIU) in Tehran gathered to protest bad conditions in their univ. pic.twitter.com/86fASmPHrT

Students from the University of Tehran protested in front of the entrance to the university on Saturday, December 8th, chanting anti-regime slogans. Repressive forces arrived prior to the protest and blocked the streets around the university in an attempt to prevent the rally from occurring, but the students were undeterred.

Students at Tehran Technical College also protested on Saturday. MEK sources reported that the students chanted, “Student would rather die than accept humiliation!” and “One, Two, Three, Freedom!”

Students are the voice of change, heralding democracy and progress
December 7 : Students Day in #Iran
Aside from their active participation in the uprisings, Iranian students held at least 257 protests over the past year.https://t.co/eEQSSnO4bE#IranProtests pic.twitter.com/nThqAhDX9P

Iranian student protests against #HumanRight abuse & on the occasion of ‘Student Day’ despite the regime’s oppressive measures.
The students announced their solidarity & the workers' demonstrations and chanted:
Bread, Work, Freedom#Iran #HumanRightsDay #MakeTheWorldABetterPlace pic.twitter.com/20D54KXcXa

Suppressive forces have arrested a large number of university students in the Student Day protests. Students from the University of Tehran have been specifically targeted for arrest. Some of the arrested students have been summoned and subsequently threatened by the Intelligence Ministry. The regime hopes that it can prevent the protests from spreading with threats and intimidation. This strategy has been ineffective over the past year and has instead served to mobilize the Iranian people to increase the size and scope of their protests against the inhuman regime.