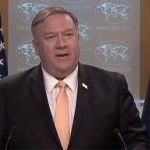 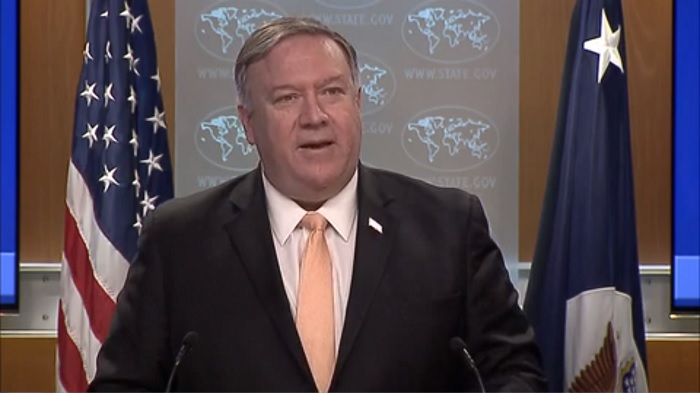 Secretary Pompeo, during the State Department Press Conference, emphasizing that U.S. Will Not Renew Sanction Waivers to Countries that Import Oil from Iran- April 22, 2019

U.S. Will Not Renew Sanction Waivers to Countries that Import Oil from Iran

On Monday, U.S. Secretary of State Mike Pompeo held a press conference in which he announced that the United States government will no longer issue waivers to countries that import oil from Iran exempting them from sanctions.

Maximum pressure on the Iranian regime means maximum pressure. That’s why the U.S. will not issue any exceptions to Iranian oil importers. The global oil market remains well-supplied. We’re confident it will remain stable as jurisdictions transition away from Iranian crude.

Exemptions for Japan, South Korea, Turkey, China, and India are set to expire on May 2nd and will not be renewed, according to Secretary Pompeo. These countries will face U.S. sanctions if they continue importing oil from Iran after that date.

The decision follows the recent designation of the Islamic Revolutionary Guards Corps (IRGC) as a Foreign Terrorist Organization (FTO) by the United States. The FTO designation makes it illegal to provide financial support, equipment, materials, or professional advice to any entities or organizations affiliated with the IRGC. Anyone found in violation may face civil and/or criminal prosecution.

The resumption of economic sanctions against the Iranian regime, the FTO designation, and the end of oil exemptions are all part of the Trump administration’s tough stance on the mullahs’ regime. The change in policy ends a longstanding policy of appeasement to the mullahs and has placed serious economic and political pressure on the Iranian regime.

Statement from the White House

The White House issued a statement in advance of Pompeo’s press conference, explaining its decision. The full text may be read below:

“President Donald J. Trump has decided not to reissue Significant Reduction Exceptions (SREs) when they expire in early May. This decision is intended to bring Iran’s oil exports to zero, denying the regime its principal source of revenue. The United States, Saudi Arabia, and the United Arab Emirates, three of the world’s great energy producers, along with our friends and allies, are committed to ensuring that global oil markets remain adequately supplied. We have agreed to take timely action to assure that global demand is met as all Iranian oil is removed from the market.

“The Trump Administration and our allies are determined to sustain and expand the maximum economic pressure campaign against Iran to end the regime’s destabilizing activity threatening the United States, our partners and allies, and security in the Middle East. The President’s decision to eliminate all SREs follows the designation of the Islamic Revolutionary Guard Corps as a Foreign Terrorist Organization, demonstrating the United States commitment to disrupting Iran’s terror network and changing the regime’s malign behavior. We welcome the support of our friends and allies for this effort.​”

Mrs. Maryam Rajavi, President-elect of the National Council of Resistance of Iran (NCRI), welcomed the decision in a tweet, writing:

Oil is a national treasure and must be put in the service of the Iranian people’s welfare and advancement. But the mullahs either plunder it or spend it on suppression and exporting terrorism and war.#Iran#IranSanctions

“Oil is a national treasure and must be put in the service of the Iranian people’s welfare and advancement. But the mullahs either plunder it or spend it on suppression and exporting terrorism and war.
#Iran
#IranSanctions”

She also described measures that the international community could take to support the Iranian people and end the religious dictatorship.

Oil embargo & #BlacklistIRGC must be complemented by other measures, including the recognition of the right of the Iranian ppl & Resistance to overthrow the religious dictatorship & designating other organs of repression,expelling MOIS & IRGC agents from US & Europe#Iran

Oil embargo & #BlacklistIRGC must be complemented by other measures, including the recognition of the right of the Iranian ppl & Resistance to overthrow the religious dictatorship & designating other organs of repression,expelling MOIS & IRGC agents from US & Europe
#Iran

Mrs. Rajavi also urged the international community to take action to visit political prisoners in Iran and to call for their release in light of recent comments from the regime’s Minister of Intelligence in which he claimed that the regime had “dealt with” 118 MEK teams in the past year.

Senior US State Department Official: the United States is Urging All Nations to Carefully Examine Diplomats in Iranian Embassies

U.S. State Department official, confirms there was no “false flag” on the terror case involving the Iranian regime’s diplomat in Austria.

In a press release from the US Department of State on Tuesday, July 10th, a Senior State Department official urged all nations to examine diplomats in Iranian embassies to “ensure their countries’ own security”.

The warning was issued after the arrest of an Iranian regime diplomat working in their Austrian embassy. Asdollah Assadi allegedly provided an Iranian couple with Belgian citizenship with 500 grams of explosives with the instructions to target the Iranian opposition’s Grand Gathering in Paris.

The unnamed Senior State Department Official offered words of caution to the international community. The official said, “we urge all nations to be vigilant about Iran using embassies as diplomatic cover to plot terrorist attacks”.

The official dismissed Iranian regime’s claims and emphasized: “We do not believe Iran’s ludicrous claim that this is a false flag.”

Javad Zarif, Iranian regime’s Foreign Minister had dismissed any role in the foiled terror plot, and had called the arrest of Regime’s diplomat “a sinister false flag ploy.”

The interviewed official added that the US is “working very closely with the Belgians and the Austrians and the Germans to get to the bottom of this plot to conduct a bomb attack in Paris”.

The most recent foiled terror attack was the latest act of aggression of a long campaign of state-sponsored terrorism in Europe. The US Government first placed Iran on a list of terrorist sponsors in 1984. “Iran was starting these hijackings on commercial airliners, bombings, assassinations”, the State Department Official Explained.

The official was referring to a string of high-profile hijackings in the 1980s and the abduction and murder of several US and European citizens.

The latest planned attack demonstrates the risk the Iranian regime poses to global security. “All nations need to exercise vigilance to protect themselves against the Iranian [regime] threat”, the official warned, adding, “we will continue to work with… our European allies… to address the entire range of Iran’s malign threats.”

Meetings will continue this week during the NATO summit, both in a formal and informal capacity. Iran will be on the agenda as the US and Europe attempt to bridge the gap between their respective Iranian policies.

“There’s no shortage of work to be done”, the State Department Official mused. The road ahead for US-European Iran policy will be thorny. But in the interests of international security, the first course of action on Iran should be ending the nefarious activities of Iran’s embassies abroad.