The Regime’s Outward Confidence is All Smoke and Mirrors

The former European Minister for Poland and current Member of the European Parliament (MEP), Ryszard Czarnecki, published an op-ed in the Eurasia Review ahead of the Warsaw summit.

The op-ed reveals that the Iranian regime’s external bravado ahead of the summit which will focus explicitly on instability in the Middle East is nothing more than bluster.

Czarnecki points to the Iranian regime’s response to US Secretary of State Mike Pompeo’s calls for an “Arab NATO” to confront and curb Iranian influence in the region. Following the announcement of the Warsaw summit, Ali Shamkhani, the head of the regime’s Supreme National Security Council mocked Pompeo publicly and downplayed the effect of US sanctions.

“When someone who says ‘sanctions with maximum pressure’ is reduced to holding ‘seminars and conferences’, it only means that he has lost the upper hand,” Shamkhani said.

His comments were echoed by the regime’s Foreign Minister, Javad Zarif, who called the summit “a desperate circus”.

A Projection of Strength to Hide Internal Vulnerabilities

“There is certainly no basis for [the] Islamic Republic of Iran to dismiss it [the summit] ahead of time, other than to broadcast a show of strength and unfounded confidence,” Czarnecki writes. “In fact, that is rather transparently the intention behind… Iran’s response. And it betrays the fact that it is the regime, not the US or any of its allies, that is “desperate” and “confused”.”

The Iranian regime is in the grip of intense internal unrest and international scrutiny. A wave of protests, organized by the People’s Mujahedin Organisation of Iran (MEK), has engulfed the country. Following a spate of foiled terror attacks on European soil, Iranian diplomatic activities abroad are under the microscope, and US sanctions are starting to ripple across the Iranian economy.

The French government initially imposed sanctions on Iran after Belgian authorities foiled a state-sponsored terror attack due to being carried out in June on the outskirts of Paris. Then, in the wake of an assassination attempt carried out by regime agents against a dissident in Denmark, the Danish government pressured the EU to adopt sanctions against the Iranian Ministry of Intelligence (MOIS), which it subsequently did.

There is a distinct sense across the international community that the decades-old policies of appeasement towards to the mullahs from both European and US leaders are coming to an end.

This has been celebrated among the Iranian resistance. The president-elect of the Iranian opposition, Maryam Rajavi, commended the West taking steps towards “rectifying and ending the disastrous policy of appeasement.”

With appeasement slowly dying, the Iranian regime finds itself increasingly isolated. Czarnecki writes, “in direct contrast to the narrative being peddled by Iranian officials, it strengthens the White House’s “upper hand.””

While it is still unclear over the extent of European nations’ participation in the Warsaw summit, and their role in a broader anti-Iran coalition headed by the United States, Czarnecki concludes, “most of the current evidence points to that shift being embraced as [a] model for Western democracies and Iran’s global adversaries. But until that happens, the possibility remains that Iran’s propaganda about successful defiance of Western power— presently just a fantasy— could become real in the face of European inaction.” 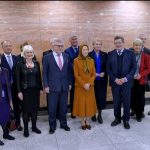 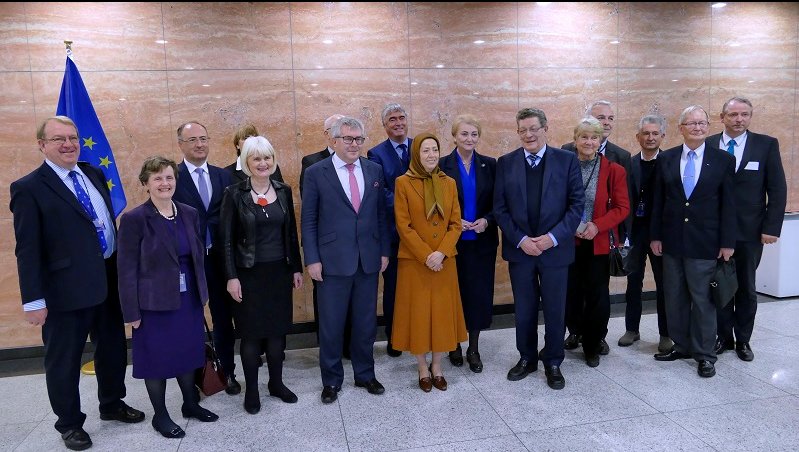 On Tuesday, January 15th, a former European Minister of Poland and sitting Member of the European Parliament, Ryszard Czarnecki, penned an op-ed for International Policy Digest. The piece, entitled ‘Western Leaders Must Join Iranian Activists in Recognizing Their Movement’s Potential’, calls on governments around the world to lend their support to the only viable democratic alternative in Iran, the National Council of Resistance of Iran (NCRI), led by Maryam Rajavi, the president-elect of the Iranian opposition, which the People’s Mujahedin Organisation of Iran (MEK) is the principal member to.

Czarnecki praised the work of the Iranian resistance units operating inside Iran to promote the Iranian resistance movement. They have worked tirelessly, “placing posters in public places throughout Tehran and other cities, identifying martyrs by name and reiterating the slogans associated with their cause.”

The President-elect Maryam Rajavi was acutely aware of the capabilities of the resistance cells in Iran. Last year, she predicted a “year full of uprisings.” 2018 lived up to her predictions.

As Maryam Rajavi predicted, 2018 was a pivotal moment for the Iranian opposition movement. For the first time, the mullahs seemed to acknowledge that the MEK was behind the surge in opposition protests. Supreme Leader Ali Khamenei blamed the MEK for the surge in street protests and pointed the finger at their shrewd use of social media to organise protests and connect their supporters as the source of their influence.

This represented a break from the regime’s traditional propaganda narrative which had maintained that the MEK was a fringe movement, with little to no support within Iran, “and incapable of affecting change on a large scale,” Czarnecki writes.

2019 is unlikely to provide the mullahs with any respite. In the opening days of the year, bank customers, municipal workers, and car buyers took to the streets to protest. The regime’s failure to address the economic crisis and its “chronic inattention to public welfare,” means that the conditions that gave rise to the protests in 2018 are still very much present in the Iranian landscape in 2019.

However, Czarnecki writes, “what is much less clear is whether the international community will prove similarly responsive.”

The Iranian Regime is a Threat to Western Democracy

The Iranian regime’s policies do not play out in a bubble and are not limited to Iran. The mullahs desire to influence regional politics make the clerical regime a threat to Western democracies and their national security interest.

Iran’s Islamic Revolutionary Guard Corps (IRGC) is active across the Middle East, including in Yemen, Syria, Iraq, and Lebanon. The mullahs have also been accused of funnelling money and weapons to militia groups across the region.

Czarnecki predicts, “the footprint of the Islamic Revolutionary Guard Corps will deepen all across the Middle East, and can affect the situation in the West, where foreign supporters of the PMOI (MEK) were targeted several times over the past year.”

Czarnecki is referring to the high-profile terrorist attacks that Iran’s Ministry of Intelligence (MOIS) planned in Paris, Albania, and the US, and the assassination plots that unfolded in the Netherlands and Denmark.

The regime has demonstrated that its actions are not limited to Iran, but place citizens from across the West at risk.

“The situation demands international attention, particularly in the form of economic sanctions and diplomatic isolation aimed at limiting the regime’s ability to project force beyond its borders and to crack down on dissent inside them,” Czarnecki writes.

The work of the MEK’s resistance units offers an opportunity for international opponents to the Iranian regime to facilitate meaningful change in Iran. While the protest movement is expanding, the Iranian regime is in a vulnerable position. Should the MEK receive “earnest and sustained support from the international community,” Czarnecki writes, “it may soon be able to achieve the long-sought goal of regime change.” 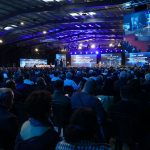 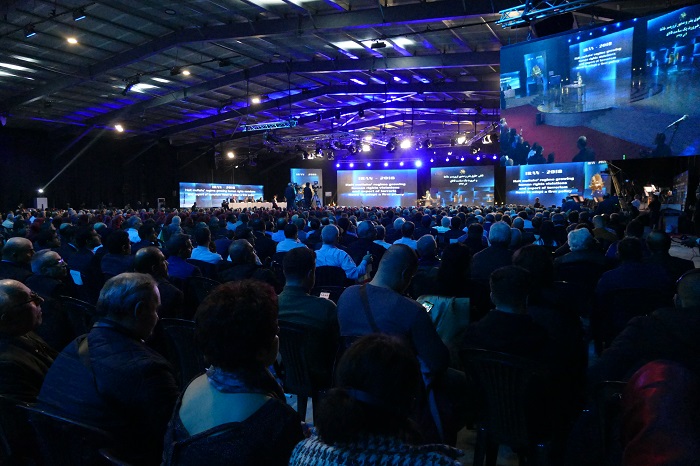 The international conference of the Iranian communities, in Ashraf 3 (MEK’s residence in Albania)-December 15, 2018

Member of the European Parliament (MEP) and the former European Minister of Poland, Ryszard Czarnecki, had a piece published on Modern Diplomacy on December 15th. Titled, ‘The Success of Iranian Activism Shows the Way to Correct European Politics’, the piece calls on Western politicians to recognize the influence of the Iranian opposition within the Iranian political landscape and adjust their Iran policies accordingly.

Czarnecki began his article by praising the increasing number of Western governments making a serious push for firm collective action against the Iranian regime. He cites the foiled terror attacks in Albania and Paris that took place this summer, as well as the arrest of two Iranian agents in the US on espionage charges, and the attempted assassination of a political dissident in Denmark as flashpoints that have led to a gradually hardening attitude towards the mullahs.

Following the failed bomb attack in Paris, the French authorities mounted an investigation and “concluded there was no doubt about Tehran’s responsibility for the Paris plot”. Czarnecki writes, “the stage was seemingly set for the entire EU to adopt economic sanctions that France had already imposed on the [Iranian] Ministry of Intelligence (MOIS) and its agents”.

But the collective response and application of economic sanctions from the EU never came. “The desire for continued access to Iranian markets is surely part of the reason for this”, Czarnecki explains.

Another reason is that, unlike the US, Czarnecki asserts that European policymakers may not be as familiar with the pro-democratic forces already operating within the Iranian landscape. The People’s Mujahedin Organisation of Iran (MEK), and the leader of Iran’s opposition, president-elect Maryam Rajavi, have a host of allies inside the Trump administration. As a result, American policymakers are aware of the organizational capabilities and popularity of the Iranian opposition within Iran.

“It might also be said that the US administration is much more aware of the existence of powerful allies inside Iranian society and the expatriate population. After all, some White House officials and close confidants of the US president have been regular attendees at NCRI rallies, including the one that was nearly bombed in June.”

Czarnecki believes that Europe’s reluctance to adopt the US’s approach and administer economic sanctions “might evaporate altogether if more European policymakers were made aware of the organizational capabilities of the MEK”.

Even among the Iranian clerical regime’s leadership, there is an increasing willingness to acknowledge the MEK’s role in mobilizing the Iranian public. The Supreme Leader Khamenei blamed the MEK for the rapid spread of anti-government protests in December and January last year.

Iranian communities around the world have also been working tirelessly to demonstrate their support of the MEK and its leader. On December 15th, Iranian communities in 42 locations across the globe, including countries in Europe, North America, and Australia, hosted simultaneous conferences calling for a collective response from Western governments to the increased Iranian terror threat.

The global teleconference drew attention to the many strikes and protests raging across Iran’s key sectors. “The persistence of those demonstrations is a clear sign of the activist community’s strength and the very real prospects for the popular overthrow of the world’s most foremost state sponsor of terrorism”, Czarnecki writes.

Czarnecki concludes, “proper recognition of the Iranian democratic opposition will prove once and for all that a firm alternative is not only justified but imperative for a triumph of democracy in the Middle East”.