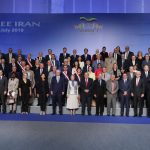 Highlights from the Free Iran Conference at Ashraf 3: Saturday’s Conference Kicks Off with Speeches from Maryam Rajavi and Giuliani 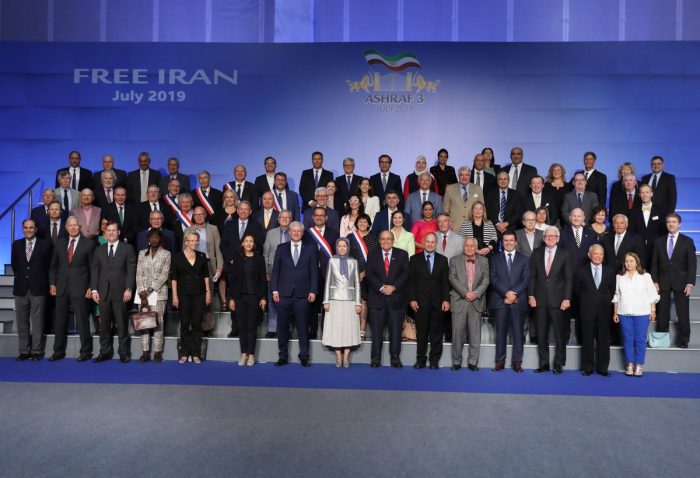 Maryam Rajavi, leader of Iran opposition during the photo-op on the opening day of a 5-day conference in solidarity with the Iranian uprising – Ashraf 3 (MEK’s compound)- July 2019

The People’s Mojahedin Organization of Iran (MEK / PMOI) hosted the third day of the annual Free Iran conference at Ashraf 3, the MEK’s headquarters in Albania on Saturday. This is the first year the annual event has been held at Ashraf 3, which was built in just over a year on farmland outside of Tirana.

Saturday’s event attracted hundreds of prominent dignitaries, politicians, and human rights activists from around the world and included dozens of speeches in support of the Iranian Resistance, as well as video of supporters from inside Iran and stories of the MEK’s fight for freedom. Thousands of MEK residents of Ashraf 3 greeted the conference attendees, holding Persian flags and cheering their arrival.

The following are some highlights from the first portion of the day’s speeches.

“Iranian opposition President Maryam Rajavi has led this movement and today we are witnessing the regime in Iran on the brink of the overthrow,” she said.

“The [MEK’s] Resistance Units have spread across Iran and have accomplished their role in the best of forms. They are directing protests and demonstrations. We are now in an extraordinary period, especially today, in Ashraf 3. This gathering with your presence has a very strong message for the Iranian people. On behalf of PMOI/MEK members I am honored to thank every single one of you, and I send my salutations to the Resistance Units,” Ms. Arvani added.

President-elect of the National Council of Resistance of Iran (NCRI), Maryam Rajavi, started her speech by saying:

“Twenty months ago, this (Ashraf 3, MEK’s compound in Albania) was an empty piece of land with nothing on it. At the hands of the Mojahedin, through their enormous efforts and hard work, Ashraf 3 was built and now stands tall. But our final destination is Tehran, freed from the occupation of the mullahs,”

The Iranian people and Resistance have paid the necessary and full price.#FreeIran#Iranhttps://t.co/g4IQG7YuCE pic.twitter.com/klALbqohV5

Mrs. Rajavi said that the policy of appeasement now carries heavy consequences. The MEK exposed the Iranian regime’s nuclear program, forced a cease-fire in the Iran-Iraq War, called attention to the regime’s human rights situation, and repeatedly blew the whistle on the mullahs’ malign activities. If they had not done so, “today, the situation would have been radically different, and the mullahs, equipped with nuclear weapons, would have created and solidified the empire and Caliphate they had long intended to establish,” she said.

In line with the policy of appeasing the religious fascism over the past 3 decades, regime apologists turned a blind eye to its crimes committed both within #Iran and abroad. They baptized the central banker and the greatest sponsor and godfather of international terrorism. pic.twitter.com/V2GIVcZwOp

But can they stop the wheels of history from turning? Can they reverse the progress of history? Never!#Iran#FreeIranhttps://t.co/g4IQG7YuCE pic.twitter.com/AqRH5xZpzn

“Massoud Rajavi began the Resistance movement in a very brave act by not swearing allegiance to [regime founder Ruhollah] Khomeini. Aren’t we now at a point in history where we all can stand up and say no more oppression and murder? You have to go,” said Mayor Giuliani.

“I accuse [Khamenei] and [Iranian regime President Hassan] Rouhani and all their followers, I accuse them of murder. Not just murder but mass murder. How can we tolerate this? Four decades of mass murder and crimes against humanity,” he exclaimed.

Giuliani said that the international community needed to do three things to secure peace and stability in Iran. First on his list was “getting the governments of Europe to stand up and reclaim their dignity and honor.”

Giuliani encouraged the leaders of Europe to “stand up.”

Giuliani said that the second thing the international community must do is to recognize that “there is an alternative to this horrible regime of terror.

“This isn’t one of those situations when we have to dispose of a regime and we know that a more horrible regime will come. That was the case in Libya. But here we don’t have that problem. We have the biggest sponsor of terrorism in the world and then we have the NCRI, led by the President-elect Maryam Rajavi,” he said.

Mayor Rudy Giuliani words about #MEK members & debunking the claims raised by the #Iran regime and its chorus of apologists/lobbyists in the West:
We know there is a group of people who are dedicated to freedom & the cause of it#IStandWithMaryamRajavi #FreeIran #WeSupportMEK pic.twitter.com/TBwuRNGYZt

“We have a government in exile that has written down its principles. Free elections in six months. Gender equality. System of law. Fair trial. And they oppose capital punishment. This is a good organization. And if you have built this place in three months, you can do that in six months,” Giuliani added.

“This is a group we can support and a group that makes us comfortable to have a regime change,” he said.

Giuliani said that the final action the world could take to support a free Iran is to “be a witness in the Biblical sense.”

Giuliani explained, “You can be a part of it. You can write, you can speak out. We don’t walk away when we see someone is oppressed.”

Senator Lieberman spoke about the MEK’s treatment in Camp Liberty in Iraq and their subsequent relocation to Albania. “We were hurt and heartbroken and angry when you were terrorized and murdered in Camp Liberty by the Iranian regime’s mercenaries. Iran is ready for a new dawn and day, you are ready, we are ready,” he said.

WOW @JoeLieberman today: "I say this as a Democrat. President @realDonaldTrump has been heroic and historic in taking the actions he has to break the Iran nuclear agreement, to impose sanctions on the Iranian government."

“Now that you are here [in safety in Albania], the NCRI and MEK can focus its efforts on the fight inside Iran,” he added.

“History is on your side. Freedom and justice will always prevail. And that is what the MEK and NCRI represent,” said Lieberman.

“I thank you for being an example to the whole world that those who are willing to sacrifice for the cause of freedom will always prevail,” said the former Senator. “Let me quote the late Senator John McCain: ‘The battle to liberate Iran is not a battle that has great significance for the people to Iran but for the great cause of freedom around the world.’”

Sen. Joe Lieberman at the #FreeIran conference in Ashraf 3
"It's not only an honor but exciting to be here in Ashraf 3. We gathered in many meetings in Paris & the crowd was enormous. Yet, there's nowhere I'd rather be today than in Ashraf 3.#WeSupportMEK#IStandWithMaryamRajavi pic.twitter.com/ci75lkoQjt

“Maryam Rajavi is a principled, visionary, selfless leader and cares for every one of you,” Lieberman said, praising Mrs. Rajavi and the MEK. “Ashraf 3 is the best proof that this movement is a viable alternative to the ruling mullahs in Iran,” he added.

“For thousands of years, when people met at street corners they said: ‘I’m a citizen of Rome.’ But today, wherever men stand tall, they will say that I was a resident of Ashraf. I never gave up, I never gave in, I’m a proud Iranian,” Senator Torricelli said.

“What began with a single woman is a chorus around the world…To those of you that are risking your lives in Iran, I say, It is your time. To the students, if you haven’t joined the brigades of resistance, join today, join tomorrow. Take your lives in your hands,” encouraged the former Senator.

“To the workers who hear my voice, break down your chains and rise up to your freedom and the right to feed your families,” urged Torricelli.

“To the Iranian community in foreign countries, the past is forgiven, the future is now, we have a common cause to restore the dignity of the Iranian people. There is only one organization that promises to overthrow the dictatorship in Iran and restore the nation and that organization is the PMOI and their leader is Maryam Rajavi,” he said.

“Gathered here today is what the regime could not buy: the respect of other nations. Democrats and Republicans, are committed to one common cause: the destruction of this regime now,” concluded Torricelli.