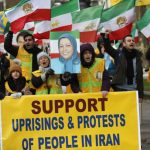 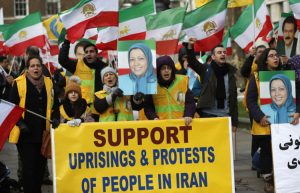 Supporters of MEK, rally in London in solidarity with Iran Protests at home.

MSNBC’s coverage of recent protests in Iran lacked the objectivity necessary to provide its audience with accurate, factual evidence on the situation in Iran. On the 25th of May, the network broadcasted its “On Assignment” program. The program, narrated by Richard Engel, repeated the Iranian regime’s false narrative on the protests, even going as far as to include a notorious agent of the regime as a key witness.

The coverage presented unfounded allegations about the Iranian opposition movement, the MEK, including that it carries out acts of torture. It also framed the prospect of change in Iran as a purely American adventure, overlooking the many protests that have racked the country in recent months, and continue to rack the country on a daily basis.

The report was forthcoming in allegations against the People’s Mujahedin Organisation of Iran (MEK) and the National Council of Resistance of Iran (NCRI), however, it failed to mention many important facts. It tried to depict the activists involved in the resistance movement as violent brutes but declined to mention that the NCRI and particularly the MEK are the prominent victims of the violence in Iran, with the regime executing as many as 30,000 of its members in the single summer of 1988.

In total, as many as 120,000 members of the MEK have been arbitrarily executed at the hands of the regime. Many more have been imprisoned on jumped up charges and face harassment from the regime on a daily basis.

The program went on suggest that the Trump administration is careering towards a war with Iran, driven on by the NCRI’s encouragement. The reality couldn’t be further from the truth. The MEK and the Iranian opposition has asserted time and time again that it does not want war. The leaders of the movement, including Maryam Rajavi, have publicly appealed against military intervention.

The Death of US Military Personnel in Iran

Based on the independent study, The MEK leaders and most of its members were in Shah’s prisons when the assassinations took place by a separatist group that had taken over the organization in the absence of all its leaders who were in Prison at the time. They had hijacked the name of the organization, changed its ideology to Marxism and even murdered some of the members who resisted their take over. MEK had no role in the alleged assassinations.

The Iran Policy Committee also found that the MEK had no part in the embassy takeover. In reality, the whole incident was orchestrated by the clerical regime to turn public opinion against, and then suppress, the Iranian opposition.

This reassessment of the circumstances around the 1979 embassy takeover led the State Department to revoke its designation of the MEK in 2012 after it found no evidence of terrorism carried out by the MEK or the NCRI. Instead, it acknowledged the MEK as a legitimate resistance movement.

Had MSNBC consulted members of the House and Senate, it would have quickly discovered that rather than a violent and aggressive organization, the MEK is a peaceful and legitimate resistance movement. Hordes of scholars and writers have publicly debunked the falsehoods and misinformation disseminated by the clerical regime about the MEK. Conducting basic research would have exposed much of MSNBC’s assertion as false.