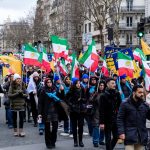 A new resolution explicitly condemning the Iranian regime’s terror attacks against opposition group the People’s Mujahedin Organisation of Iran (ME) has been submitted to the US Congress. House of Representative Resolution 374, backed by 39 members of both the Democrat and Republican parties, also expresses the support of the US House for the Iranian people’s calls for a democratic, secular and non-nuclear Iran.

The resolution cites the ten-point plan from the President-elect Maryam Rajavi as a viable roadmap towards a democratic Iran. The plan maps Iran’s course to free elections, the establishment of the universal right to vote, the separation of religion and state, the removal of the death penalty, gender equality, equal rights for religious minorities and the dismantling of the Iranian regime’s nuclear weapons program.

The resolution also calls for increased cooperation between the US government and governing bodies in Europe to combat the threat of Iranian state-sponsored terror.

The Iranian regime intensified its espionage and terrorist activities on European and US soil throughout 2018. It has become an issue that heads of states from around the world cannot ignore any longer.

In 2018, the regime plotted terror attacks and assassination attempts against the MEK in Albania, France, the Netherlands, Denmark, and the US. The most severe of which, a planned car bomb to be detonated at the MEK’s annual Grand Gathering event in Paris, endangered the lives of more than 100,000 dignitaries and political figures from across the globe.

The Iranian regime has systematically used its embassies and diplomatic outposts to further its terror objectives. The planned Paris attack involved diplomats working at the Iranian embassy in Vienna and an Iranian diplomat by the name of Assadollah Assadi provided the perpetrators with explosive material for use in the attack.

Expanding Diplomatic Efforts in the Balkans

The resolution reminds that the US has an obligation to oppose human rights abuses and state-sanctioned terrorism across the globe wherever it occurs. The Iranian people have expressed their will in the streets in the form of vast anti-regime protests. Now it is up to the world to take note and ensure the international community comes down on the right side of history.