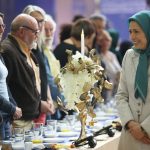 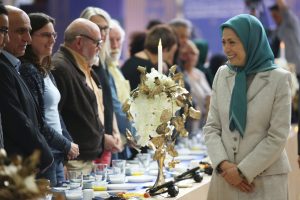 Maryam Rajavi welcomes Muslim dignitaries on the occasion of Ramadan-May 19, 2018

Muslim dignitaries from around the world attended an event on the occasion of the Holy Month of Ramadan on Saturday, May 19th. Maryam Rajavi, President-elect of the National Council of Resistance of Iran (NCRI) and the leader of the People’s Mujahedin of Iran (MEK), spoke of her aspirations for this holy month.

She expressed her hope that this month would yield victories in the emancipation, peace brokering, and solidarity around the Middle East, particularly in Syria. She said, “Today, the first step in solving the Syrian problem is evicting the Revolutionary Guard Corps (IRGC) from that country”.

Maryam Rajavi added that peace and stability in the Middle East depended on the removal of the Iranian regime. The clerical regime’s funding of terrorism and pursuit of nuclear weapons threatens the security of the entire region. Rajavi asserted that the restoration of peace and stability in the region could only be realized with the elimination of the mullahs’ tyrannical regime.

Rajavi praised the protest movement in Iran. She described the profound impact the movement has had across Iran, stating “Iran’s uprising erupted in late December 2017, but its waves have continued ever since, through the strikes and protests of workers, farmers, teachers, plundered people and other social strata.” She also hailed the objective at the heart of the protestors; the overthrow of the regime.

Maryam Rajavi’s final message was for the international community. She contended that the only way to tackle the Iranian regime’s warmongering and terrorist efforts is to stand with the Iranian protestors in their quest for regime change. She said, “turning a blind eye on the suppression and slaughter of the people of Iran emboldens the mullahs’ religious tyranny in its crimes.”

Her concluding remarks urged the UN Security Council to investigate the crimes of the mullahs and routine human rights abuses in Iran and refer the case to an international tribunal.

She asserted that her organization and the Iranian opposition defend “genuine Islam”, which spurns compulsory religion, economic exploitation, and inequality. She asserted that the MEK and NCRI champion equality, and fraternity between Sunnis and Shiites, reiterating that the NCRI stands in direct opposition to the regime, representing a democratic alternative to religious tyranny.

Her closing statement was one of optimism. “With the resolve of the people of Iran and all the Middle East nations, freedom, democracy, peace, and brotherhood will undoubtedly surmount the criminals.”