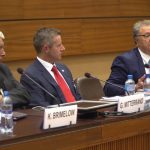 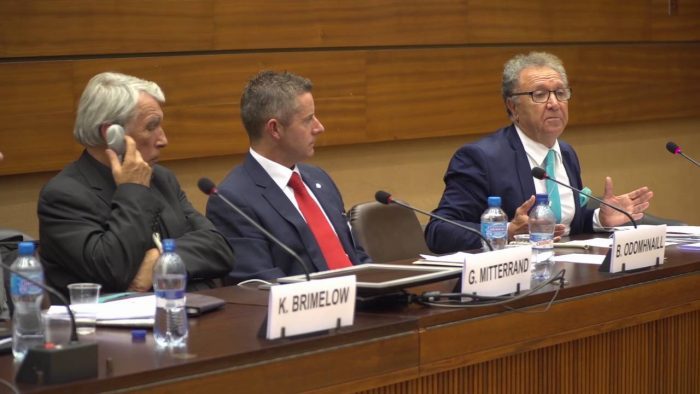 Perviz Khazai, speaking at a high level of experts panel, during a conference in the United Nation’s headquarter in Geneva, seeking international justice over Iranian regime’s 1988 massacre of 30,000 political prisoners, mainly MEK activists.
Mr. Gilbert Mitterrand (Left) President of the Foundation France Libertés – Danielle-Mitterrand Foundation since 2011, Irish Senator
Brian Ó Domhnaill (Middle) who served for the Agricultural Panel since August 2007, was also among the speakers at this conference-September 30, 2016

International law expert and former apprentice diplomat in the French Ministry of Foreign Affairs, Perviz S. Khazai, wrote an op-ed for news site Eurasia Review. Khazai charts the nature of EU-Iran relations in the wake of the US’s designation of the regime’s Revolutionary Guards (IRGC) as a foreign terrorist organization (FTO).

Khazai’s point of reference begins in 2010 when the Iranian regime and Europe butted heads over the Iranian nuclear program. This rift was smoothed over by the Joint Comprehensive Plan of Action (JCPO), the nuclear agreement signed in 2015.

“However, since agreeing to the 2015 deal, Iran has expanded its nuclear program,” Khazai writes, “despite warnings from the United States and European Countries.” This culminated in the early months of 2019, when the Iranian regime attempted to launch a satellite into orbit.

The EU expressed its concern and has called on the Iranian regime to refrain from any further missile launches. The EU Council said in a statement, “these activities deepen mistrust and contribute to regional instability.”

Then, in February, the EU discussed re-imposing select sanctions on Iran. The discussion marked the first time Iranian sanctions had been brought to the table since 2015. The sanctions were limited. The EU only chose to sanction one deputy minister of the Iranian Ministry of Intelligence (MOIS) and two MOIS members. But they represented a cooling attitude towards the Iranian regime following several failed terror attacks on European soil.

The EU Is Resisting the US’s Economic Sanctions

Aside from its own limited sanctions, the EU has displayed a reluctance to follow the US down the road of economic sanctions. Following the re-imposition of US economic sanctions under US President Donald Trump, several European nations established INSTEX, a payment channel through which they could continue trading with the Iranian market and circumvent US sanctions.

But rifts in the regime leadership have hampered INSTEX’s methods. In March, the regime Supreme Leader issued a statement during a public speech that INSTEX was a “bitter joke” and reminded his followers that the EU cannot be trusted.

Although persevering with INSTEX to continue trading with Iran, several EU nations have sanctioned Iran’s Mahan Air. The airline is known to carry resources and equipment for the regime’s IRGC.

“Germany imposed its ban on Mahan in January, with the German foreign ministry saying this was necessary to protect Berlin’s ‘foreign and security policy interests,’” Khazai wrote.

Reports from Reuters in November found that the regime systematically targeted MEK members living in European countries through online misinformation channels. The Netherlands is also accusing the regime of being behind two assassinations of political dissidents on Dutch soil last year.

“Since the 1979 Iranian revolution, the Islamic revolutionary guard’s corps (IRGC) have been dedicated to export [sic] terrorism abroad. Despite the efforts of the EU and US during past years, Iran has never terminated its support for terrorist organizations especially in Syria, Lebanon, Yemen, and Iraq,” Khazai writes.

Khazai calls on the EU to support the US’s designation of the IRGC as a terror organization. “Europe should sit up and take notice that the protests and strike action ongoing across Iran since the end of 2017 by teachers, laborers, students, truck drivers and so many more [are] already a game changer,” he writes.

“European governments and institutions would be wise at this point to discontinue their current dialogue with Tehran while they undertake a full and in-depth review of their approach toward Iran. Full transparency and accurate information made available to the public would be an essential requirement.”

The panel of speakers at the Geneva conference on the situation of human rights in Iran-March 7, 2019

On Thursday, March 7, the Iranian opposition gathered in Geneva for a conference on the Iranian regime’s human rights record throughout 2018. The Iranian people have endured four decades of regime rule. They have suffered barbaric and violent human rights abuses. But now they are making their voices heard and taking to the streets to say, ‘enough is enough’.

Remy Pagani, a Swiss politician, opened the conference by decrying these arrests. He told those gathered that “it is time that democracy moves forward, and human rights are respected in Iran.”

.@remy_pagani
For 40 years, since the establishment of the mullahs’, come see that the end of mullahs is drawing closer.#HRC40 #1988Massacre #HumanRights@UNHumanRights pic.twitter.com/Z3NnSgMAzo

The Iranian people are doing all they can to move democracy forward. Protests break out across the country daily. Most recently, Iran’s teachers demonstrated over unpaid wages and the unlawful arrests of their peers. “After 40 years of clerical dictatorship, 80 million Iranians have had enough,” former Member of the European Parliament for Scotland, Struan Stevenson said, “men and women, students, truck drivers… have taken to the streets in protest against [the] fascist mullahs’ regime.”

Aside from rampant human rights abuses, the economic decline caused by the mullahs’ mismanagement of Iran’s finances is galvanizing the population. Iran’s middle-class is shrinking. Inflation has skyrocketed. Iranian purchasing power has dropped dramatically, and many workers now struggle to make ends meet.

When Parviz Khazai addressed the conference, he criticized the mullahs’ wasteful spending that brought about the economic collapse of Iran. “The regime is at war with its own people but also at war against [the] Lebanese… it supports dictators, spending Iranian assets in the war against [the] people of the region and elsewhere,” he said.

At War With Its Own People

In 1988, the regime executed 30,000 members of the MEK and the Iranian opposition. Death squads rounded up dissidents and marched them to the gallows. Amnesty International recently released a report on the massacre, but it has been overlooked by the international community and the UN in recent years. This has been an ongoing issue, one that the Iranian opposition and their allies are calling to amend.

Taher Bumedra of the MEK said on the subject, “we hope the new rapporteur will continue to work on this issue and his next report will include this crime against humanity perpetrated by the mullahs’ regime in 1988.”

Taher Bumedra: The new rapporteur should take up the work where Mrs. Jahangir left off. The crime was confirmed by a big study by @amnesty International.#HRC40 #1988Massacre #HumanRights #StandUp4HumanRights @mbachelet@antonioguterres pic.twitter.com/mI068JXjqK

Inaction Only Emboldens the Regime

All the speakers were in agreement that inaction over the regime’s human rights abuses, including the 1988 massacre, only serves to embolden the regime and continue their crimes. Bumedra added,

“if the UN does not take action on the massacres that took place in Iran, that will encourage the regime to continue its behavior.”

Waiting for the regime to investigate itself is not an option. Many of those involved in the 1988 massacre now hold senior positions in Rouhani’s government, including the head of the judiciary, which only serves to compound the trauma the families of the 1988 victims carry with them.

.@Alfreddezayas: Mullahs should not have impunity. There are many ways of bringing this to the public. #HRC40 #1988Massacre #HumanRights #StandUp4HumanRights @UNHumanRights@mbachelet pic.twitter.com/Jop9NvneKt

Alfred de Zayas, a former UN independent expert on democracy and equitable international order, called for an investigation into the crimes. He said the “mullahs should not have impunity.”

Women Bear the Brunt of the Regime’s Crimes

Today, women are among those that suffer most under the regime. In Geneva, Simin Nouri, the President of the Association of Iranian Women in France, shed light on the plight of Iranian women. She said 30 million women across the country now live in poverty, many of which are forced to turn to prostitution to make money to survive.

Because of this, women are at the forefront of the protests against the regime. They are an integral part of the Iranian resistance. Nouri said, “regime authorities have confessed that the main triggers to protests have been women rejecting all powers in the regime and its corruption and expansionism.”

Mrs. Simin Nouri: There are many misogynist law in the #Iran.
But I have to insist on the important role of women in the recent uprising against mullahs regime.#HRC40 #1988Massacre #HumanRights #WomensRights #StandUp4HumanRights @antonioguterres@javaidRehman pic.twitter.com/IX23xrpVE5

Despite routine harassment, arbitrary arrest, and torture, the brave men and women of Iran continue to take to the streets to protest this vile and abhorrent regime. Nouri called on the international community to “support morally and physically the protestors in Iran.”

Abandoning the Most Vulnerable

Among all the regime’s deplorable acts, few are as violent and merciless as its treatment of Iran’s children. Victims are executed for crimes they committed as children, under the age of 18 and public executions leave young Iranians traumatized. Sahar Sanaie drew attention to their situation. She said, “children experience daily humiliation of their mothers and other women of their family.” Schools teach young girls they are inferior.

Sahar Sanaie:
Children are victims of state violence in Iran. They are faced with judicial violence such as public executions.#HRC40 #Iran#1988Massacre #HumanRights #WomensRights #StandUp4HumanRights @antonioguterres pic.twitter.com/QqZUrbWsaF

Later in the conference, the families of those executed at the hands of the regime were given the floor. They told heart-wrenching details about how 16-year-old and 18-year-old family members were executed for nothing more than holding political beliefs that differed from those of the mullahs.

One family member, Sima Mirzaie, said, “it is 40 years that my and other families have [had] no rest. We ask the UN to bring the perpetrators to be tried. It is our legal right to know what transpired with our loved ones.”

This brutal regime cannot be permitted to carry out these crimes without consequence and punishment. It is up to all of us to be the voice of those who have been killed by the regime and add our calls to those calling on the UN to launch a full investigation into the crimes of 1988, and those more recently. Without it, Iranian families will continue to struggle, not knowing what happened to their loved ones.