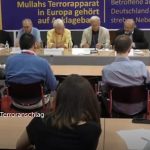 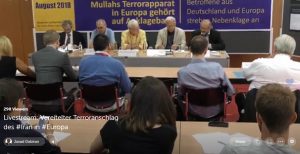 On August 22nd, 2018, the National Council of Resistance of Iran (NCRI) held a news conference in Berlin to reveal new information on the Iranian regime’s foiled terror plot on European soil back in June.

The conference featured speakers, Martin Patzelt, a member of the German Bundestag and member of Germany’s Human Rights Committee, Eduard Lintner, State Secretary in the Federal Ministry of the Interior, Bernd Hausler, Human Rights Commissioner of the Bar Association in Berlin, and Javad Dabiran, of the NCRI.

Eduard Lintner,State Secretary in the Federal Ministry of the Interior a.D.,#Berlin Conf:The fact that an #Iranian diplomat deployed at its Austrian embassy has been involved in #Paris terror plot,shows #Iran is responsible. Govs must pay attention & # pic.twitter.com/XvgHuX5zlk

A Cause for International Concern

On June 2nd, as Iranian opposition groups, including the NCRI and the People’s Mujahedin Organisation of Iran (MEK), gathered for their annual Grand Gathering in Paris, a Belgian couple of Iranian descent were travelling in a car with 500g of homemade explosive, determined to carry out a terrorist attack against the MEK and NCRI.

The couple had received the explosives, as well as their instructions, from Assadollah Assadi, an Iranian regime diplomat working at the Iranian embassy in Vienna, Austria.

Bernd Hausler described the devastation that was no narrowly averted. He said the plot could have “targeted thousands of participants”, including “hundreds of politicians”. He asserted that the issue “should be of international concern”.

Martin Patzelt,member of the Bundestag:"As a member of the #HumanRights committee,I've emphasized in many occasions that #Germany shouldn't betray its humanitarian&democratic values for trade benefits. I'm worried that diplomacy lead against R morals.#ExpelIranDiplomatTerrorists pic.twitter.com/33AaRk3sXR

After Hausler, Javad Dabiran from the NCRI addressed those in attendance. He began by informing the audience that the US State Department had arrested two intelligence agents in the US on August 9th. He said that the pair, Ahmadreza Mohammadi Doostdar and Majid Ghorbani, were plotting attacks against the MEK and NCRI.

The pair were responsible for gathering information on the MEK and had been actively doing so since at least March 2017. They were sending this information back to Iran, so the regime could coordinate cyber-attacks, kidnappings, and assassinations against the MEK.

He went on to reveal that Assadi, who is currently in custody in Germany, was an explosives expert within the Iranian Ministry of Intelligence (MOIS). Dabiran revealed Assadi has a long history of terrorist acts from his posting in Baghdad, and in his position at the Iranian embassy in Vienna, he was responsible for coordinating terrorist plots all over Europe.

.@JavadDabiran:The decision to launch a terrorist attack on #FreeIran2018 rally in #Paris that led to the arrest of the Iranian “diplomat” in #Germany was made at the highest level, by the Supreme National Security Council headed by Hassan #Rouhani #ExpelIranDiplomatTerrorists pic.twitter.com/QwgLqwInCN

In response to Assadollah Assadi’s arrest, the Iranian regime has established a Supreme National Security Council to mitigate the international fallout of his arrest. The council includes senior members of the MOIS, IRGC and Quds Force, and has been charged with securing Assadi’s release from custody.

.@JavadDabiran: Assadollah Assadi(mastermind of #Paris foiled terror attempt against #MEK's FreeIran rally), currently in #German custody, is the head of the #MOIS stations in Europe. In this capacity he oversaw the work of the MOIS in #Germany. #ExpelIranDiplomatTerrorists #Iran pic.twitter.com/JU4GM4DYTn

The regime is fighting Assadi’s extradition to Belgium and the initiation of legal proceedings. It wants to see him extradited to Austria, where the regime holds much more influence, and could potentially negotiate his return to Iran.

What do we know about Assadi?

Aside from his position as a lynchpin for plotting terror attacks across Europe, Javad Dabiran also revealed his former responsibilities in earlier postings for the MOIS. Assadi joined the MOIS in his birth province, Lorestan. He was initially responsible for rounding up members of the MEK and Iranian opposition groups.

He was shortly promoted and began becoming involved in coordinating attacks. During the US invasion of Iraq, he was sent to Baghdad with the instruction to collect intelligence on the coalition forces.

He spent four years in Iraq, serving in his Baghdad posting between 2004 and 2008. During this time, he effectively coordinated attacks against the coalition and the MEK in the area. He played a central role in the kidnapping and assassinating key Iraqi officials, as well as coordinating roadside bombings, and IEDs. He was also heavily involved in the May 2006 bombing which killed 11 Iraqi workers traveling in a bus to Camp Ashraf (the headquarters of the MEK).

His role in the regime chain-of-command

NCRI representative, Javad Dabiran, also shed some light on Assadi’s position in the regime’s chain-of-command. He revealed information that suggested Assadi reported directly to Reza Amiri Moghadam, one of the most senior officials within the MOIS and former IRGC member.

.@JavadDabiran: The terror plot was assigned to the“Organization of Foreign Intelligence &Movements”,part of this org. is stationed in the Foreign Min.& oversees the intelligence activities of the regime's embassies headed by Reza Amiri Moghadam.#ExpelIranDiplomatTerrorists #Iran pic.twitter.com/dwA32uDTBT

Moghadam reports to the Iranian Minister of Intelligence and Security, Mahmoud Alavi. Given Assadi’s proximity to senior regime officials, Dabiran concluded that following Khamenei’s approval of the terror plot against the MEK in Paris, Alav would have briefed Moghadam on the details, who would have entrusted Assadi to orchestrate the plan.

Dabiran ended his address with a plea to the US and Europe. He asserted that the international community faces a “highly-organised campaign of terror by the main state-sponsor of terrorism [the Iranian regime]”.

He cited the failed bombing plot in Albania in March, the Paris plot, and the recent arrest of regime agents on US soil, as evidence that “the clerical regime has given new momentum to all of its entities that are engaged in terrorism in the West”.

The NCRI, therefore, proposes that justice is brought to Assadi and all those involved in the terror attack against the MEK and its allies. It also proposes that Europe arrest, try, and expel Iranian agents carrying out subversive operations on European soil. Finally, it recommends that the regime offices in Europe be closed.

Dabiran concluded, “the only solution is firmness. Any leniency or hope for a change in the conduct of this regime is naïve and delusional, and will result in dire consequences”.