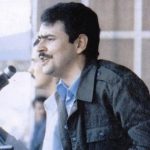 Written by Admin on January 26, 2019. Posted in Defenders of Freedom 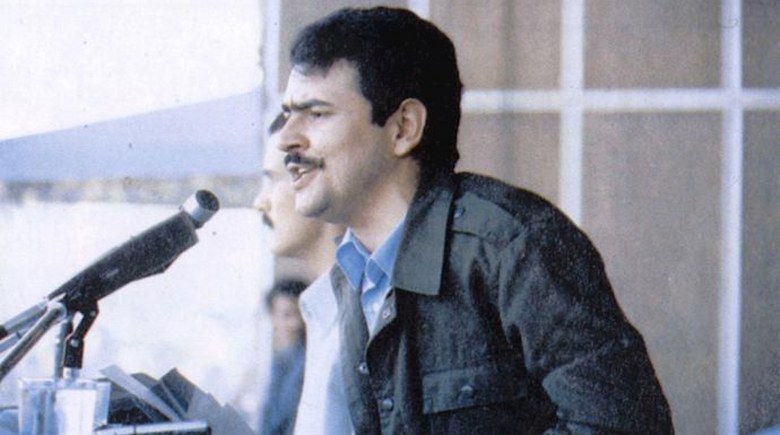 Massoud Rajavi, the historical leader of the Mujahedin-e Khalq (MEK/PMOI), addressing a crowd of up to 200,000 supporters of MEK in Amjadiyeh-Tehran-June 1980

The People’s Mojahedin Organization of Iran (PMOI / MEK) organized a rally at Amjadiyeh Stadium in Tehran on June 12, 1980, to protest the mullahs’ escalating despotism.  Days earlier Khomeini (the then regime Supreme Leader) had shut down all of the universities under the pretext of the cultural revolution which aimed to suppress the students.

More than 200,000 people attended the demonstration.  Mr.Massoud Rajavi, the historical leader of the MEK, warned the crowd of Khomeini’s creeping dictatorship and urged them to “defend freedoms, freedom of speech, associations, and gatherings.”  He declared the PMOI would not be intimidated.  “We’re not afraid of bullets,” he said, “If freedom means death, then we will die.”19

Hezbollah thugs tried without success to force their way into the stadium.  They clashed with MEK(PMOI) supporters outside the facility, throwing stones and bricks, while policemen and Islamic Revolutionary Guards stood idle nearby.  When the government forces later intervened, they fired tear gas into MEK (PMOI) crowds and automatic weapons into the air.
As reported by Le Monde, Mr. Rajavi spoke while “fighting continued outside and his words were lost at times in a cacophony of explosions, machine-gun bursts, and ambulance horns.”20

“Do you hear?” Mr. Rajavi asked as he addressed himself to the Hezbollahi (Regime club-wielders).  “We are neither Communists nor pro-Soviets as you claim.  We are fighting for the total freedom and independence of Iran….Freedom is not granted,” he cried as the crowd rose to shout to its feet.  “It is won.  A gift of the Lord, it is as indispensable as oxygen.”21 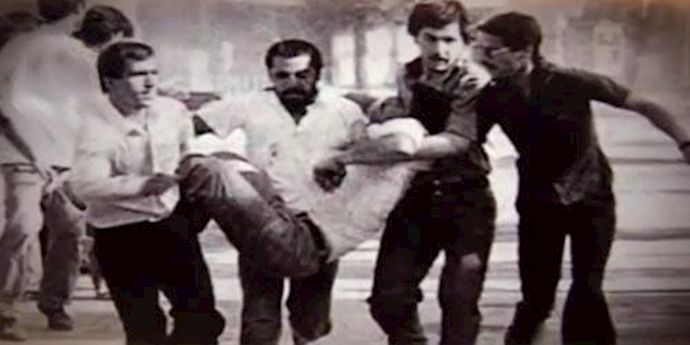 MEK supporters were shot by IRGC forces, as they were trying to leave Amjadiyeh Stadium

Members of the audience were attacked as they left the stadium.  Hundreds were injured and five were killed.  As reported by Le Monde, “Shots were fired from nearby roofs and bodies lay on the sidewalks. Young men with bloodied faces were running in all directions.”22

With each passing day, the MEK (PMOI) gained strength while Khomeini’s support drained away.  The Ayatollah openly considered the possibility of defeat, stating on June 17, “Never have I so much feared to see the Islamic Revolution end in failure.”23

On July 25, Khomeini lashed out at the Mujahedin-e Khalq in a radio broadcast, declaring the resistance organization to be the “main enemy.”  Khomeini said, “Our enemy is neither the United States, nor the Soviet Union, nor Kurdistan, but sitting right here in Tehran under our nose.”  The Ayatollah continued:

“The Monafeqin [meaning hypocrites, his pejorative term for the Mujahedin-e Khalq] are worse than infidels.  They say they are Muslims, but they act against Islam….Today, we clergymen are being called reactionaries…and those people [MEK/PMOI] are being called the intellectuals.”24

Khomeini’s speech was interpreted by the Hezbollah and Revolutionary Guards as a green light to destroy the pro-democracy organization.  The MEK / PMOI closed down an additional 30 offices across Iran, hoping to avoid the further “shedding of innocent blood.”25  Weeks later, the mullahs announced a ban on all political demonstrations.