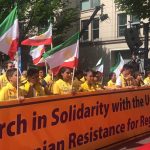 The Associated Press Covers the Anti-Regime Protests in Washington D.C. 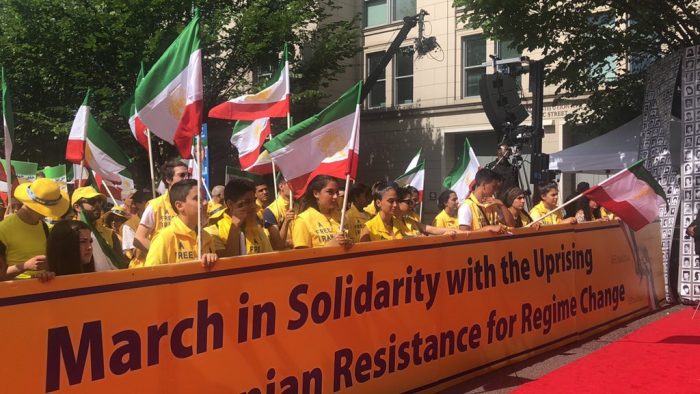 Thousands of Supporter of the MEK rally for regime change in Iran, Saturday, June 21, 2019

The Associated Press journalist Matthew Lee covered the Iranian opposition’s March for regime change in Washington D.C. on Friday, June 21. In a report featured on the AP’s website, Lee described the scale and fervor of the event which saw thousands of Iranians from across North America, as well as Republican and Democrat leaders,  gather at the State Department in protest at regime aggression.

Everyone senses the explosive state of Iranian society. mullahs offer neither a solution nor are willing to resolve the problems.
The “moderation” masquerade to preserve the regime has been unmasked. Support @Maryam_Rajavi 10point plan for #FreeIran#March4RegimeChangeByIranians pic.twitter.com/czEdTuPTbL

“Clad in yellow vests emblazoned with the words “Free Iran,” more than 1,000 members of the Mujahedeen-e-Khalq [MEK] gathered outside the State Department to demand an end to Iran’s theocratic government,” Lee wrote.

Fellow sympathizers of the #Iran ian Resistance, rebels for a #FreeIran, travelling all the way from across the U.S., to come together in Washington, D.C. The Iranian nation hears your anthems and your cries for freedom. #March4RegimeChangeByIranianshttps://t.co/k5UsN2hDGy pic.twitter.com/Aj3j6BIhPL

Credit to AP photo: Activists gather at the State Department and watch a message on the screen from Maryam Rajavi before a march to the White House to call for regime change in Iran, Friday, June 21, 2019, in Washington.

In the Regime’s Crosshairs

With their allies holding senior positions in the US government, the MEK has seen its popularity and influence steadily increase. The increasing numbers of Iranians lining Iran’s streets at MEK-organised protests and rallies, and the regime’s further isolation on the international stage has prompted the mullahs to renew efforts to disrupt and undermine the MEK.

In 2018, the regime launched a string of terror attacks against the opposition group. During the Persian New Year celebrations, the regime attempted to detonate a bomb at the group’s compound in Albania. The Albanian authorities foiled the plot before the bombing could be carried out.

A similar attack was planned for the MEK’s annual Grand Gathering event in Paris. The Iranian regime through its embassy in the Austrian capital of Vienna provided a Belgian-Iranian couple with an explosive ordinance and instructed the pair to travel to the event and detonate a car bomb. Once again, Belgian authorities were able to thwart the plot in its late stages.

UPI, in a report dated June 21, 2019 wrote: “Thousands of Iranian Americans rallied outside the U.S. State Department and White House in Washington, D.C., on Friday to push for a regime change and increased sanctions on Tehran.”

The UPI said: “In addition for increased sanctions on the Iranian regime, demonstrators called for the United States to designate the Ministry of Intelligence and Security as a foreign terrorist organization.”