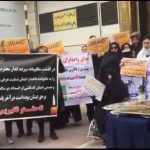 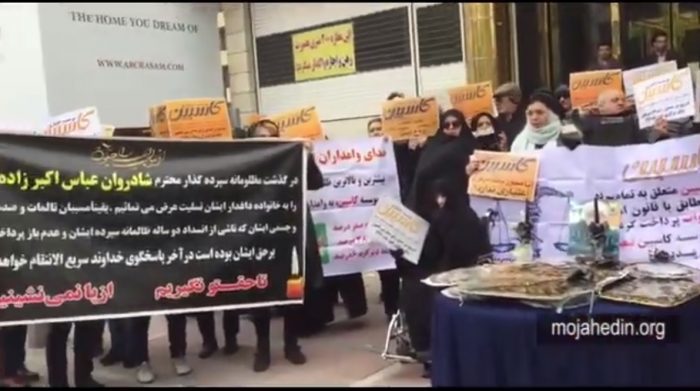 Looted customers held protests this weekend in Tehran and Mashhad to demand the return of their savings, MEK sources report from inside Iran. The protests are the most recent in a series of protests by customers in cities across Iran who have had their savings stolen from them.

Customers of the Caspian Credit Institution gathered in Tehran on Sunday to demand that the regime’s parliament hold the credit firm accountable for the illegal Ponzi scheme that robbed millions of Iranians of their savings and investments.

On Saturday in Mashhad, clients of Badr Tous, one of the financial institutions which merged with Caspian before it declared bankruptcy, protested in front of the governorate in Khorasan Province.

The protesters addressed officials at the Caspian Credit Firm and the Iranian regime when they chanted, “Is this the Central Bank, or the center of thieves?”

“Caspian has committed theft, the government has supported it!”

The protesters were clear in stating that the regime was complicit in the looting of their savings. They also vowed to continue to protest until their money is returned. Credit firm clients have protested off and on for well over a year now, so their threats carry weight.

In 2017, Caspian and four other credit institutions declared bankruptcy, emptying billions of dollars of money from its investors’ accounts. The credit institutions, which were closely tied to regime officials, had received permits from regime ministries to take investor money and were widely trusted by the Iranian people. Three years prior to their collapse, the credit institutions began collecting investments from Iranians, promising high rates of return. Many people deposited their life savings into the credit institutions, believing that they would be safe there. After the collapse of the credit firms, the customers found their accounts were empty. Protests have been taking place since then. The MEK has reported on the ongoing protests as they have occurred.

Also on Saturday, customers of the website Sekeh Samen gathered in front of the headquarters of the Gold and Jewelry Union in Tehran to protest the union’s corrupt practices. The union was one of the primary supporters of the website. Protesters entered the union building and chanted slogans as part of their demonstration.

Sakeh Samen was launched in 2016 as an online marketplace for buyers and sellers of precious metal coins and gold products. The site claimed to provide 24-hour services worldwide. However, in August of 2018, the website suddenly took down its online trade section, supposedly for maintenance. The Gold and Jewelry Union, which is responsible for regulating the trade of precious metals, then ordered the closure of Sekeh Samen altogether. Thousands of online traders were left with emptied accounts and no way to collect on their debts.

The Gold and Jewelry Union claimed that Sakeh Samen did not have a work permit, but the union had actively promoted the site on its online portals and in its facilities. The site’s inexplicable closure has triggered another series of protests against the regime’s financial corruption and mismanagement.

The MEK supports the protests against the regime and its corrupt economic policies. The mullahs’ mismanagement of the Iranian people’s wealth affects people from all walks of life, and it will only get worse until the regime is toppled and Iran is free.
Staff Writer 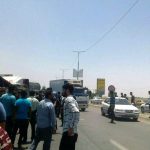 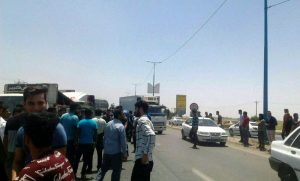 On Monday, May 28th, Our Iran published a report on the protests that took place in Iran last week. More than 489 protests were held in the one week period, with an average of 69 protests each day. Truck drivers, workers, and others who have suffered at the hands of the Iranian regime turned out in droves in cities across Iran to protest the economic policies of the corrupt government.

The protests can be broken down into the following categories:

Based on reports from the MEK network, on May 22nd, truck drivers from several cities went on strike, pledging to continue the strike until their demands were met. Truck drivers cited a number of reasons for their strike, including low freight weights, unjust cargo distribution, reduced driver wages, and excessive price increases for tires and spare parts.

The strike has been massive in scale, taking place in at least 242 cities and 31 provinces. A total of 406 protest activities by the striking drivers have been held over the first six days of the strike.

The cohesiveness of the striking drivers and their actions to prevent other drivers from breaking the strike have been notable. Also worth noting is the drivers’ refusal to submit to government intimidation, even in the face of beatings by government agents.

The effects of the strike were almost immediate, with fuel shortages beginning on the second day of the strike. Some gas stations were forced to close completely, while those who remained open had long lines. On the fifth day, bus drivers in several cities began to strike in solidarity with the truckers. Drivers working for factories and companies also joined the strike, causing shutdowns and disruptions in the affected businesses.

Those participating in the truck driver strike include:

Funerals for Omid Reza Yousefian, Ali Mohammadian Azad and Mehdi Hadi Javanteb, martyrs of the Kazerun uprising, were held last week. The widely attended funerals turned into protests against the government, with mourners chanting: “Death to Yazid of the era!” “Death to the dictator!” and “My martyred brother, I’ll take your revenge.”

Tehran markets were disrupted last week by strikes by Jafari Market, Soltani market and Amir Kabir market. Some malls also participated in the strike, as well the Qom, Isfahan, Jolfa and Maku markets, which shut down their shops. The strike was in protest of the stagnant financial market caused by the regime’s policies.

Traverse Railway strikes have been ongoing and continued last week. Workers in Semnan, Shahroud and Damghan are participating in the strike, which is in protest of nonpayment or delayed payment of wages and rising insurance premiums.