Written by Esmail Mohades on February 23, 2020. Posted in NEWS

Javaid Rehman, the UN Special Rapporteur, published a report on the matter of human rights abuses in Iran. He was shocked beyond belief when he discovered the seriousness of injuries inflicted on those detained as a result of last November’s street protests. They were not only mistreated in custody but some were killed, others have had to live with serious injuries and a minor is involved too. Worse still the report said that detainees were often denied medical treatment for injuries caused by interrogation methods used by the security forces. It even appears that some people have disappeared completely. 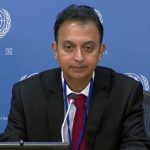 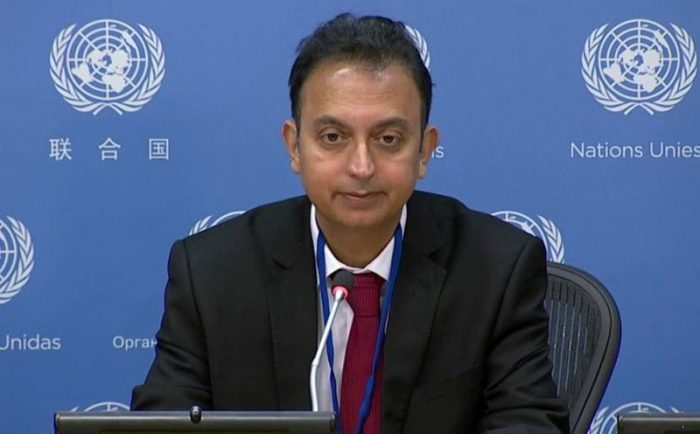 Javaid Rehman, the UN Special Rapporteur on human rights in Iran, delivering his report to the UN

On Monday, March 11th, United Nations Special Rapporteur on the situation of human rights in Iran Javaid Rehman presented his first report to the U.N. Human Rights Council. In his report to the council, Rehman expressed concern about the increasing number of executions in Iran and the regime’s practice of sentencing minors to the death penalty.

In responding to Rehman’s report, the Iranian regime’s Ambassador to the U.N. in Geneva Esmaeil Baghaei Hamaneh focused on the MEK’s role in exposing the regime’s human rights abuses, saying, “It is very unfortunate that one of the main sources for the Special Rapporteur’s documents is the [MEK] who have been recognized by their supporters as the opposition and human rights advocates.”

#MEK Resistance Units Honor International Women’s Day with Acts of Rebellion
"we can and we must overthrow the mullah's regime in Iran."#PMOI network in Iran took to graffiti#FreeIranWithMaryamRajavi#womanthemovie #CSW63@phumzileunwomen @UN_Womenhttps://t.co/HL6xk6OQ8E pic.twitter.com/RF9afudKje

Hamaneh’s words are reflective of the regime’s attitude toward the MEK, which it sees as an existential threat and often attempts to delegitimize when it feels threatened.

.@chavezlinda, a former White House official,condemned #HumanRights violations in Iran & the recent appointment of Ebrahim #Raeesi (Ebrahim Raisi) as the regime’s judiciary chief,a perpetrator of the massacre of 30,000 political prisoners in 1988.#1988Masacre@SecPompeo@EUatUN pic.twitter.com/Vz1dJNdNFp

Despite Hamaneh’s assertions, Rehman’s report is consistent with the U.N. ’s previous research, which has found Iran to be the world’s leader in executions per capita for years. The Iranian regime has refused a number of requests by Rehman to visit the country to independently assess the situation.

Rehman was particularly concerned about the fact that the Iranian regime regularly sentences children to death. Under Iranian law, the death penalty may be imposed on girls as young as nine and boys as young as 15. This is a clear violation of both international law and U.N. conventions. As a member of the United Nations, this practice is a violation.

“The practice, illustrated in numerous cases reviewed, of waiting until the child offender reaches the age of 18 before execution, repeated postponements, and the inherent vulnerability of the child given his or her age, amounts to a pattern of torture and other ill-treatment,” said Rehman.

He further stated that at least six people convicted of crimes that occurred when they were under the age of 18 were executed in 2018. Another 85 child offenders currently await execution.

Rehman called on the Iranian regime to comply with international law by abolishing the death penalty for juvenile offenders. He also asked that all current death sentences against children be commuted.

Rehman also expressed concern about the regime’s treatment of protesters who have taken to the streets in increasing numbers since the nationwide popular uprisings in December 2017. He noted that the country is in the midst of an economic crisis, which has led to massive protests over unpaid or delayed wages, water and food shortages, lack of healthcare, high unemployment, and substandard living conditions.

The Iranian regime has responded to protests by arresting the participants in large numbers. Rehman called for their release.

In his report, Rehman said, “Today, the people of Iran face a myriad of challenges. Many have voiced their concern through protests, demonstrations, and strikes. People from diverse sections of society—from truck drivers to teachers to factory workers—across the country have protested. It is in this context of increased challenges that concerns are mounting about human rights, including the rights to freedom of peaceful assembly and to association in Iran.”