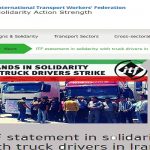 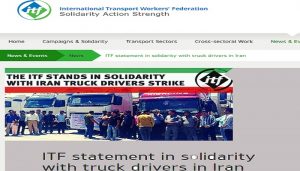 The International Transport Workers’ Federation, on behalf of the 20 million transport workers worldwide that our organisation represents, stands in full solidarity with the truck drivers of Iran as they enter a tenth day of strikes.

June 1st marked the Eleventh day of strikes by Iranian truck drivers. The truckers began their strike in protest of poor wages amidst rising expenses, as well as safety and workers’ rights issues. The strike has gathered steam over the past eleven days, spreading from the Qazvin, Lorestan, East Azerbaijan and Mazandaran areas in its first days to 280 cities in every province today.

The strike has caused major disruption to businesses across Iran, with many factories and businesses being forced to close. Fuel shortages in the first days of the strike led to gas station closures and long lines at the pump. Despite this upheaval, reports show that the public has been largely supportive. The striking drivers have also received support from influential unions and organizations in the transport industry. On Tuesday, May 29th, the Teamsters tweeted their support of the striking drivers in Iran:

“Iranian truck drivers in 25 provinces and 160 cities have been on strike over low pay, rising operating costs, increased tolls and other regulatory fees. #Teamsters stand in #solidarity with our Iranian brother & sisters! teamster.org/sites/teamster… @AdenaNima @ITFglobalunion #1u”

Iranian truck drivers in 25 provinces and 160 cities have been on strike over low pay, rising operating costs, increased tolls and other regulatory fees. #Teamsters stand in #solidarity with our Iranian brother & sisters! https://t.co/rageqo2hF8 @AdenaNima @ITFglobalunion #1u pic.twitter.com/HZAzp1jXxA

The International Transport Workers Federation (ITF) joined the Teamsters in declaring their solidarity with the striking workers in a statement on Thursday. Noel Coard, head of inland transport for the ITF, spoke about the issues facing truck drivers in Iran as part of his statement on behalf of the ITF: “Truckers’ wages are not enough to cover their expenses. Together with the vast majority of ordinary Iranians, they have been suffering the impact of ongoing inflation and price hikes.”

Coard also spoke of the role of unions in protecting truckers’ rights: “Workers’ rights, including the right of independent trade unions to represent their members, are key to resolving these issues.”

The ITF represents 20 million transport workers worldwide. The powerful union has previously worked to address the issues of road safety and low wages in the transport industry. It unveiled a supply chain accountability initiative in December 2016, which is being rolled out by the ITF with affiliated trade unions.

Truck drivers in Iran have vowed to continue their strike until their demands are met. After ten days, the strike shows no signs of ending. In fact, the strike continues to spread across the country, gathering support despite the widespread disruption caused by the absence of these vital workers.