Written by Esmail Mohades on January 24, 2020. Posted in NEWS

Since the beginning of October last year, the people of Iraq have managed to maintain momentum on their nationwide uprising. They have been protesting against political corruption that has transformed their country into a shadow of its former self. 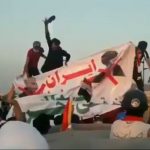 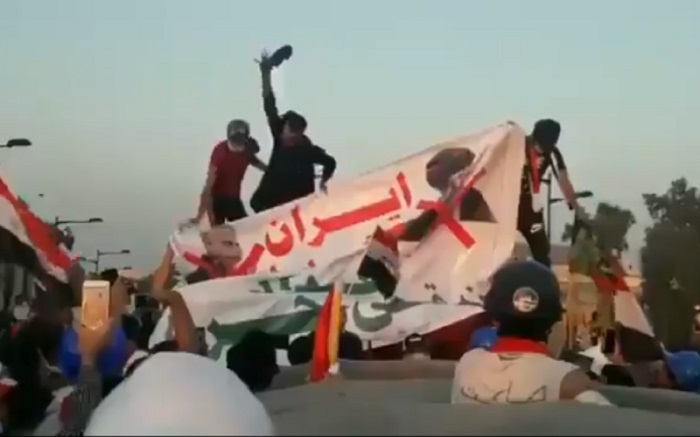 Iraqis show their anger against the interfere of the Iranian regime in their internal affairs, October 2019

In an interview with Fox News, Mark Dubowitz, head of the Foundation for the Defense of Democracies, said that by spending nearly one billion dollars a year to support its terrorist proxy forces, the Iranian regime is the worst state sponsor of terrorism in the world, expanding its malign influence throughout the globe.

He added that the Iranian regime is a military dictatorship that has occupied Iran; Iranian people hate this regime. This regime has spent billions of dollars in supporting the brutality of Bashar al-Assad in Syria. The Head of the Foundation for the Defense of Democracies concluded that the Iranian authorities try to make nuclear weapons and intercontinental ballistic missiles (ICBMs) for delivering them, which beyond terrorism, is a prime threat.

With mounting unrest in Iraq and Lebanon, the Iranian regime witnesses its “Strategic depth” collapsing. It seems that spending billions of dollars in Iraq and Lebanon has been in vain. The biggest blow to Ali Khamenei, the supreme leader of the regime and Qasem Soleimani, head of the terrorist Quds Force, who spent Iranian wealth on the Hezbullah in Lebanon and paramilitary forces in Iraq, while keeping eighty percent of the Iranian people under the poverty line.

Mrs. Maryam Rajavi, the President-elect of the National Council of Resistance of Iran (NCRI), said in 2004 that while their nuclear program has been a strategic means for the mullahs’ survival; however, the regime’s interference in Iraq is a hundred times more dangerous than its nuclear program.

The world has paid a heavy price for the disastrous strategy of the US in the Middle East past years. Millions of people in Iran, Iraq, Syria, Lebanon, and Yemen suffered from Iranian terrorism in the region.

Iranians, as well as Iraqis and the people of Lebanon, reject the Iranian regime’s interference.

The religious dictatorship ruling Iran is gripped in profound crises. There is no question that the regime’s days are numbered. In contrast, the democratic alternative is flourishing.

The MEK and Iranians, as well as Iraqis and the people of Lebanon, are determined to get rid of the mullahs building free democratic countries to guarantee peace and co-existence in the region. 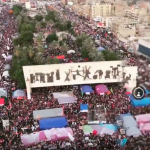 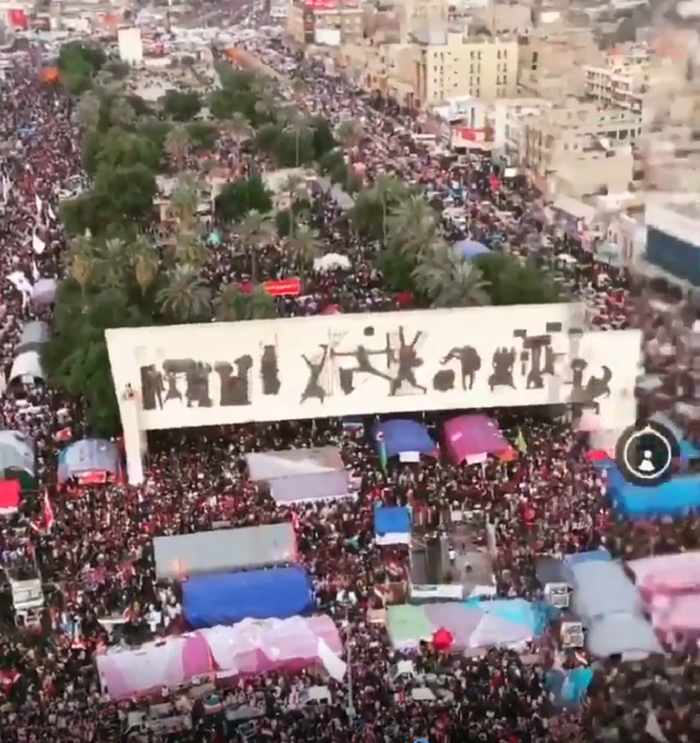 Iraqis took to streets demanding eviction of the Iranian regime from their country, November 2019

Iran’s supreme leader Ali Khamenei broke his two-week silence on the intensifying crises facing the regime in the Middle East, during a ceremony at the Khatam al-Anbia Air Defense Academy on Wednesday, where he expressed concern about the future of the regime.

In his remarks, Khamenei, on several occasions, addressed the critical state of the Iranian regime and claimed, wrongly, that the “enemies” of the regime were trying to “disrupt” the true interests of the Iranian people.

This is actually an admission that there is great turmoil in the regime at the moment, with the regime’s Revolutionary Guards (IRGC), and other troops, losing confidence in the regime and defecting.

Khamenei addressed this previously on October 2, during a session with IRGC commanders and outright admitted that defections were a major issue; something that is significant because his regime is trying to keep power in Iraq and Lebanon, which it considers its “strategic depth”. You can see how important these two countries are to the Iranian regime because of how much money the regime invests in their proxy militias there.

Khamenei used the same bizarre thought process to talk about the uprisings in Iraq and Lebanon, saying that it was a “conspiracy” by the enemies of the regime “to cause strife and undermine security” and create a power vacuum.

It is clear from this comment that he is actually talking about Iranian surrogates, like former Iraqi Prime Minister Nouri Al-Maliki and National Security Advisor Faleh Fayyadh, and terrorist proxies, like the Popular Mobilization Forces, the terrorist Lebanese Hezbollah and its commander Hassan Nasrollah.

AP: Iraqi people strongly protesting #Iran's meddling.
Tens of thousands of people rallying in Baghdad's Tahrir Square in the largest anti-government rally that began a month ago. Many people have been killed & injured in clashes with security forces.pic.twitter.com/etxh1epR4W

Khamenei said that “the enemies had similar plans for Iran”, but failed to note that the Iranian people’s uprising has been going on for nearly two years now. He simply cannot understand that the people of the Middle East don’t like Iranian interference in their affairs.

This only displays the desperate state of this regime, indeed the Shah dictatorship resorted to the same kind of rhetoric linking protests to the “enemy” just before its overthrow. Of course, what is happening in the streets paints a very different picture.

Interestingly, he didn’t comment on theses crises that the regime is dealing with: the growing Mujahedin-e Khalq (PMOI/MEK) units’ activities, intensifying Iranian protests against the Iranian regime, the non-ratification of the anti-money laundering and terrorism financing bills required by the Financial Action Task Force (FATF), US sanctions, walking away from the nuclear deal, social crises, etc. 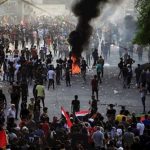 Message of Iraqis’ Uprising for the Mullahs 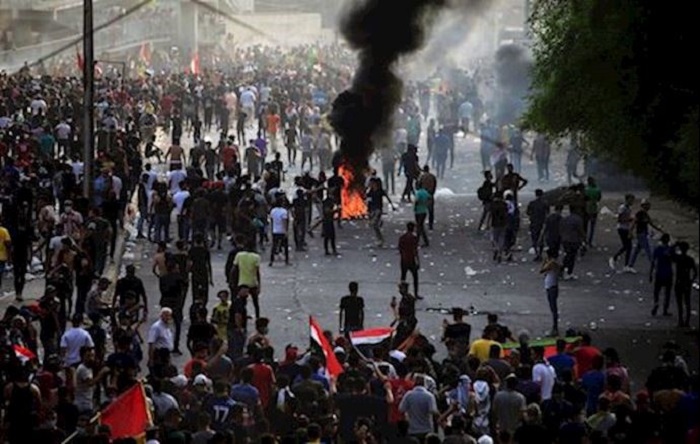 The uprising in Iraq continued for the seventh continuous day on Monday, 7 September. Frustrated people who could not tolerate corruption, poverty, terrorism and hidden occupation of their country by the Iranian regime any more took to streets.

Specifications of the Iraq uprising

This is not the first time Iraqis show their anger against the poor economic and social situation in their country; however, this time things are different. Differences can be summarized as follows:

Second: this uprising is totally popular, contrary to the previous ones generated by political partied who had lost their legitimacy amongst the people and it does not depend on the usual political deals in Iraq.

October 2 – Baghdad, Iraq
Demonstrations continue for the second day against corruption, lack of public services and meddling in Iraqi affairs by the regime ruling #Iran.pic.twitter.com/p2goXKlGNP

Third: from the beginning, the angry protesters shouted: ” get lost! Iranian regime” and attacked the symbols of the Iranian regime in Iraq including offices of paramilitary groups, Iranian proxy thugs, and also offices of political figures affiliated to the mullahs. They torched Khamenei’s posters in their protests. The two key slogans, “regime change” and “get lost Iranian regime ” side by side show that Iraqis now realize any change in their country would not be within reach without the eviction of the mullahs and their proxies.

This is most alarming for the mullahs witnessing Iraqi demonstrators chanting “Iran, OUT, OUT” and set to the mullahs’ regime’s symbols on fire.

Forth: Khamenei prepared his regime to take advantage of the coming religious ceremony in Iraq spending millions of dollars; however, this uprising backlashed his plans.

Fifth: this uprising occurs in the Capital, Baghdad, and particularly in Southern provinces with Shiite domination. This foils the mullahs’regime’s allegations that Shiites in Iraq are its allies. In Najaf, an important religious city, where mullahs claim to enjoy great influence and support amongst the Iraqis, angry protesters clashed with paramilitary groups associated with the Iranian regime, forcing them to flee.

Now the mullahs are furious more than ever. Friday prayers’ leaders across the country compare the current uprising in Iraq with the people’s uprising in Iran in early 2018, showing their fear for MEK’s impact on Iraq’s uprising.

Regardless of the mullahs’ accusations, the reality is that the presence of MEK in Iraq for decades has left a deep impact on Iraqi society. Seeds of acknowledgment implanted by MEK in Iraq, are now blooming.

Records show the popular support for the MEK in Iraq in the past three decades, including petitions signed by three million Shiites and five million Shiites and Sunnis both together on two different occasions. Iranians and Iraqis, as well as the people of the region, are suffering from this religious, dictatorial regime and naturally support the resistance against this barbaric regime.