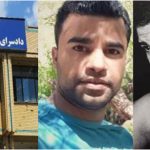 Written by Mohsen Aboutalebi on January 25, 2022. Posted in NEWS

After two years of incarceration and torture, the Iranian regime sentenced political prisoner Mohammad Javad Vafaei Sani, a boxing champion from Mashhad, to death on January 9.

Following the big demonstrations in Iran in 2019, Vafaie was arrested and put to death on charges of supporting Iran’s leading opposition party, People’s Mojahedin of Iran (PMOI / MEK Iran), as well as “corruption on earth,” a fabrication used by the ruling theocracy to legitimize its public executions. Vafaie, however, is not the first detained athlete-protester to face the death penalty. Despite international calls to avoid his execution, Iran’s wrestling champion Navid Afkari was hanged on September 12, 2021.