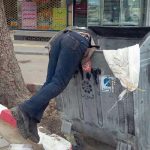 Moshen Hashemi: The Second Half of 2018 Could Bring a “Tsunami” of poverty in Iran 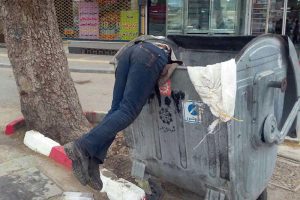 A man searching for left overs inside a trash can, a very common scene in Iran today, due to government’s corruption and spending the country’s income to fund terrorism, development of Ballistic Missile programs and for domestic repression.

The Iranian economy continues to slide. In the last six months, the rial has plunged, losing approximately half its value against other international currencies. Around one-third of Iranians are now living below the poverty line, and one in ten live in what is known as “absolute poverty”.

In one single month, between March and June, the purchasing power of Iranians fell by more than 48%. The Head of the Workers Union of Chadormalu Mining and Industrial Company, Akbar Alipour, spoke of how the falling income levels of Iranians are clearly visible in the streets. He said, “we can see very clearly how income levels, and subsequently people’s welfare, have dropped”.

The mullah’s “quick and careless formation of policies” has ravaged the economy, according to the Chairman of Tehran’s Council, Mohsen Hashemi. There is no sign of improvement in the months to come. A regime official predicted that the second half of 2018 would bring a “new wave of inflation”, leading to “even lower purchasing power”, and even more widespread poverty.

The clerical regime does not have the budget to handle another wave of inflation. It has already proven itself inept at dealing with the current economic crisis. Its responses to the economic crisis have been ineffective and merely exacerbated the situation.

An Economy Creaking under the Weight of Mismanagement

Moshen Hashemi summed up the current situation in Iran. He said, “poverty is bearing down on Iran’s society like a Tsunami”. The regime’s officials are in panic mode. A “snowball of social damages” are reaching a critical point and threaten to spiral out of control.

Alipour warned of the devastating impact falling income levels would have on Iranian families. “Many families will be falling apart”, he said, adding, “especially given the desperation of many people, including workers, are already experiencing now”.

With a population of 60 million people, there is little doubt that further economic decline would pose a real problem for the mullahs. It would create a domestic situation where the slightest spark could ignite nationwide protests, similar to those seen in December and January, but on an even greater scale.

As the situation has worsened, the protest movement has evolved. The protests since March have targeted inflation and economic decline. The protestors slogans have called for “death to Khamenei”, and “death to Rouhani”. Khamenei himself has acknowledged the nation’s economic problems and the internal unrest.

Alipour insisted that “there has never been a time in history, where workers have been on the verge of absolute hunger like now”. The Iranian people are hungry. Hungry for food to feed their families. Hungry for economic security. Hungry for a better standard of living and welfare. And above all, hungry for regime change.