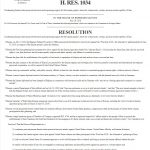 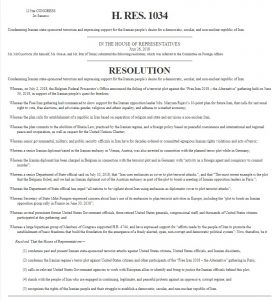 The HR1304 resolution referred to the U.S. House of Representatives Committee on Foreign Affairs, expressing concerns over the terrorists activities of the Iranian regime and supporting Iranian people’s quest for freedom.

The text of the resolution explicitly condemned the Iranian regime’s use of state-sponsored terrorism against Iranian dissidents and US citizens. It also expressed solidarity with the Iranian people “who are engaged in continuing legitimate and peaceful protests against an oppressive, corrupt regime”.

The bill acknowledged the role of the Iranian regime in the foiled terror attack on the Free Iran rally in Paris. It also recognized the rights of the Iranian people “to establish a democratic, secular, and non-nuclear republic of Iran.”

The move comes after details emerged of a terrorist plot organized and planned by the regime leadership in Iran. French authorities arrested a Belgian couple of Iranian descent with explosives in their possession. Their target had been the 2018 Free Iran rally, organized by the Iranian resistance coalition, the National Council of Resistance of Iran (NCRI), and the People’s Mujahedin Organisation of Iran (MEK).

The rally, which took place on June 30th, drew in a crowd of more than 100,000 people, as well as delegations of politicians, journalists, and activists from the US, Canada, France, Germany, the UK, among others.

Following the arrest, the couple admitted that they had received their orders and the explosives from Assadollah Assadi, a diplomat working within the Iranian embassy in Vienna, and an agent for the Iranian Ministry of Intelligence and Security (MOIS). Assadi was arrested by German authorities following the couple’s admission.

The foiled plot is merely the latest development in a long history of state-sponsored terror and violence. The Iranian regime’s leadership have been behind hijacking, assassinations, kidnappings, and bombings which have taken place across the globe since the 1980s. Hossein Abedini recently described his harrowing experience of being attacked by two masked gunmen in 1990.

A Firmer US Stance

While European Governments have offered muted responses following the failed terror attack on French soil, the US has been unequivocal. On July 22nd, Secretary of State, Mike Pompeo, addressed the Iranian-American community at the Ronald Reagan Presidential Foundation and Library. He pledged the support of the US government to the Iranian people in their quest for democracy and regime change.

A Senior Official in the State Department also urged the international community to investigate diplomat activity in Iranian embassies. The anonymous official stated, “all nations need to exercise vigilance to protect themselves against the Iranian [regime] threat”.

The latest resolution from the House of Representatives is in line with the US Government and the Trump administration’s firmer stance towards the clerical regime in Iran. It also goes further than previous messages of support.

The bill acknowledges the regime’s involvement in terror activities and condemns it accordingly, but it also recognizes the right of the Iranian people to establish a democratic republic in Iran.

The resolution explicitly mentions President-elect of the NCRI, Maryam Rajavi’s 10-point plan dedicated to establishing a secular, democratic, non-nuclear Iran. This holds significance for the Iranian people and the opposition coalition.

Rouhani’s brutal and violent regime cannot be permitted to engage in international acts of terrorism with impunity. The US has taken the lead in condemning the abhorrent actions of the mullahs. Now the rest of the world, particularly Europe must follow the US Government’s lead. The Iranian regime must be held accountable for its violence.