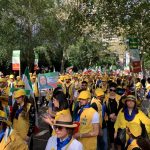 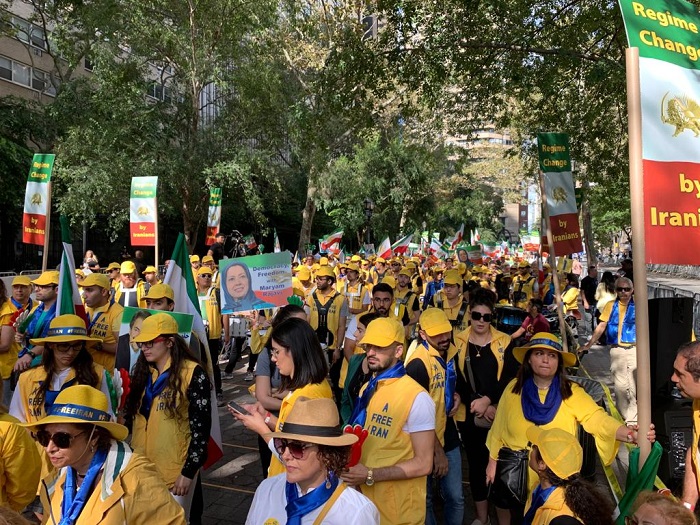 The Iranian diaspora in the US gathered in front of the UN, protesting against the presence of Ruhani, President of the Iranian regime, Sep 24, 2019

Along with the UN General Assembly in New York, thousands of Iranians staged a demonstration across the street from the UN headquarters to protest the presence of Hassan Ruhani, the president of the mullahs’ regime.

Participants condemned the policy of fueling regional wars and terrorism. They stressed that this regime must be decisively dealt with and Ruhani be excluded from the United Nations Headquarters. 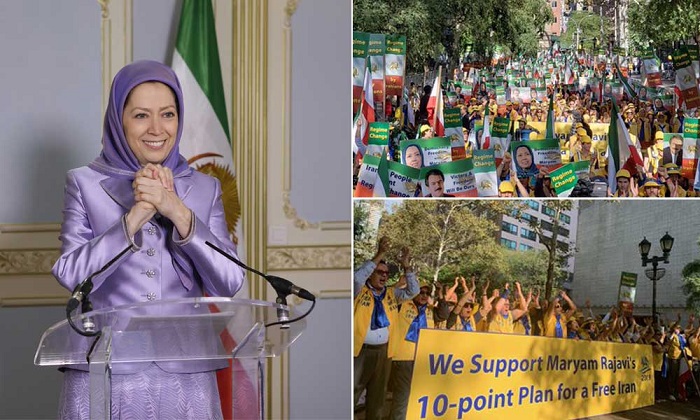 Maryam Rajavi delivers a speech to the rally against Ruhani at the UN headquarters,  Sep 24, 2019

The National Council of Resistance of Iran’s President-elect Maryam Rajavi sent a video message to the Iranians gathered in front of the UN headquarters in New York. She affirmed in her message:

“Your gathering is a NO to the continued power of a handful of occupiers and criminals in Iran and YES to the overthrow of this regime by the Iranian people and the Iranian resistance.

You represent the voice of protest and resistance of the Iranian people.

The centers of revolt and the resistance councils, whose courageous activities throughout Iran have kept the flames of the uprising and protest on the rise. After the Iranian regime targeted Saudi Arabia’s oil installations with missiles and drones from inside Iran a few days ago, the real question before the international community is no longer the party that launched the attack. It is necessary to adopt a firm and comprehensive policy towards this regime. Ruhani, the so-called moderate president of this authoritarian regime, has tacitly stated his support for this provocative act. Khamenei’s representative in Mashhad also confirmed the link to the attack by the mullahs, saying that Ansar Allah in Yemen and all the armed militias of the regime in Lebanon, Syria, Iraq, and Palestine all represent the Iranian regime. Khamenei himself, after the attack on Saudi Arabia, stipulated that any negotiations at any level with the United States should be conducted with the latter’s repentance. So what is the rhetoric of those who promote the policy of appeasing the ruling killers in Iran? The UN Security Council must declare the Iranian regime a threat to world peace and security. We call on all States to participate in the establishment of an international front against religious fascism. The international community must recognize the right of the Iranian people to overthrow the religious fascism and to achieve freedom.”

“The Iranian resistance can govern Iran in an unprecedented way from the regime of terrorism to a democratic and free system under the leadership of Maryam Rajavi, a system that ends the death penalty and restores respect for women’s rights! Look what Mrs. Rajavi has done. The transition from a dictatorship to democracy will lead within six months. Mrs. Rajavi is a great woman.”

“The attacks of the Iranian regime are continuing. Our policies will not change the behavior of the regime. It is regime change that can end the bloodshed in the Middle East,” Giuliani added. 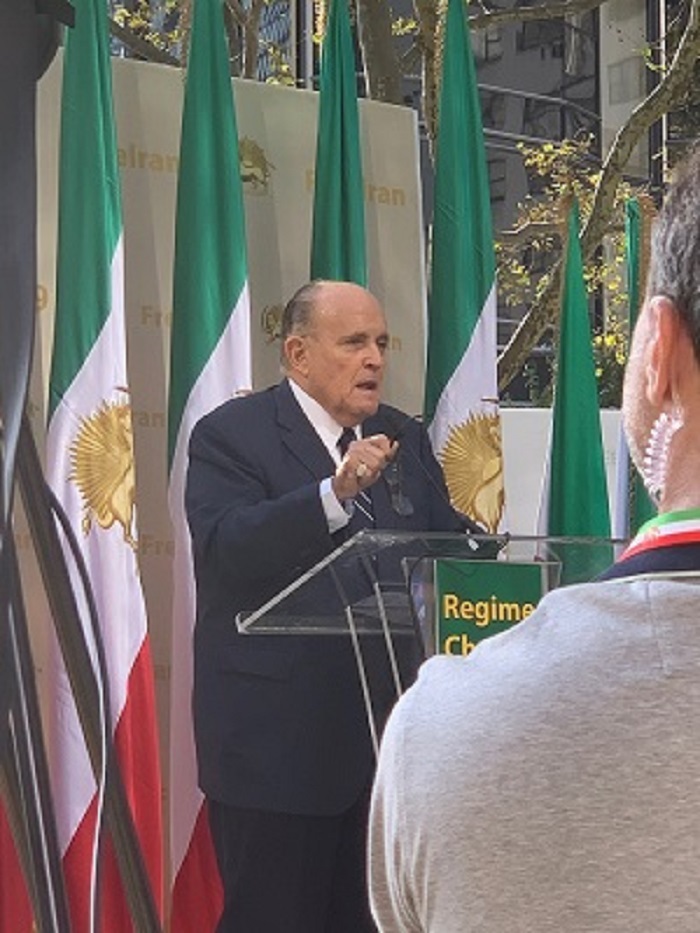 Mayor Giuliani delivers a speech for the protesters against the Iranian regime’s President at the UN Sep 24, 2019

In her speech, Sona Samsami, representative of the National Council of Resistance of Iran in the United States, called on the member states of the United Nations to impose comprehensive sanctions on the regime for gross violations of human rights and the continuation of the nuclear and missile program and creating chaos in the Middle East. In their slogans and banners, the demonstrators stressed that Iran’s seats in the United Nations should be given to the just resistance of the Iranian people and the democratic alternative of the National Council of Resistance, and the right of the Iranian people to resist and topple the inhuman dictatorship of the mullahs be formally recognized.

Former US Senator Robert Torricelli said in his speech: “We are united as a global entity and we will change the regime and bring freedom to the Iranians.”The Syrian opposition coalition participated in the demonstration, to support the Iranian resistance and to stand by a free and non-nuclear Iran in peace with its neighbors.

The demonstrators declared their full support and solidarity with the protests and the centers of revolt in Iran in their quest to overthrow the regime and achieve freedom and the establishment of a system of government representing the people in Iran.