Maryam Rajavi, addressing a large crowd of over 15,000 Iranians, supporters of MEK in Berlin, during the Free Iran rally- July 6, 2019

The rally and subsequent march received widespread attention from media outlets across the world. The Associated Press reported on the rally and Mrs. Rajavi’s speech in support of the ongoing uprising in Iran and the organized resistance movement.

?#Berlin??
06 July 2019
NO: 3
@AP: Women raise their fists at a rally for the uprising and resistance of Iranian citizens at the Brandenburg Gate. #NCRI#FreeIran#BlacklistRouhani#IStandWithMaryamRajavi @SecPompeo pic.twitter.com/jcqW2D4o2E 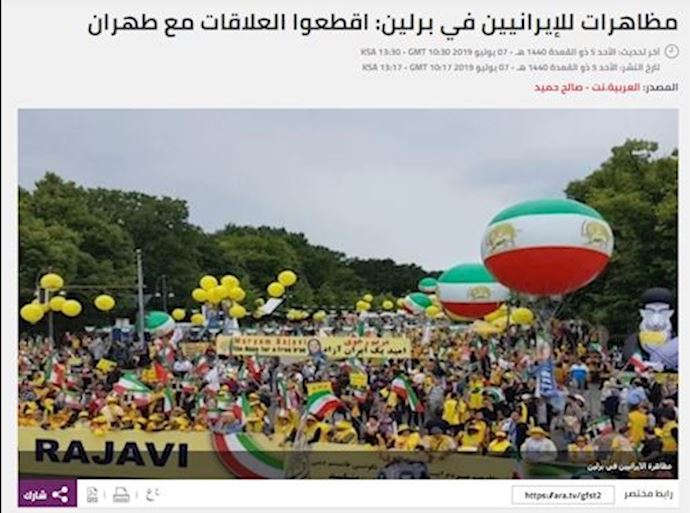 The Al Arabiya news network reported that Iranian demonstrators called for regime agents of the Islamic Revolutionary Guards Corps (IRGC) and Ministry of Intelligence and Security (MOIS) to be prosecuted and expelled from Germany and the rest of Europe. The thousands of MEK members in attendance also voiced their support for the anti-regime protests currently taking place in Iran.

The European Pressphoto Agency (EPA) covered the rally as well, publishing 40 photographs of the event. According to EPA, NCRI supporters from across the world gathered in Berlin to call for regime change and the establishment of democracy in Iran.

Germany’s Channel One website wrote that 15,000 Iranians rallied in support of human rights and against executions in Iran. The website added that the Iranian regime has been repeatedly condemned for its high rate of executions.

“Several thousand people demonstrated in Berlin against the political system in Iran and for human rights. Under the motto: ‘Solidarity with the Citizens’ Protests in Iran – Against the Death Penalty,’ they held a rally at the Brandenburg Gate in the evening. A large banner read: ‘Time for a free Iran’. Many people wore Iranian flags and held large balloons in the national colors green-white-red. The protest march was registered by the exiled Iranian society.

“In Iran, the death penalty is imposed for, among other things, murder, rape, armed robbery, and heavier drug trafficking. Iran has been the focus of international criticism for many years due to its numerous executions.” 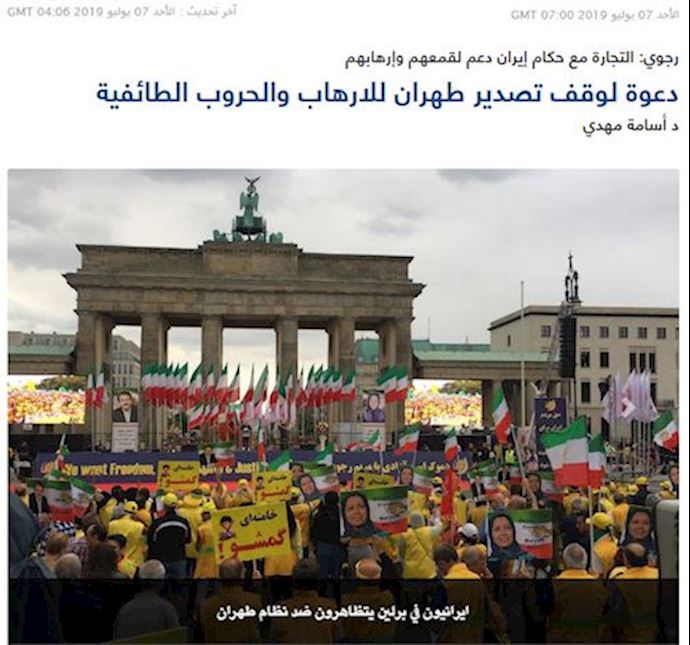 The London-based Elaph news outlet reported on speeches by Mrs. Rajavi and other notable dignitaries. Elaph wrote that Mrs. Rajavi warned Europe against providing incentives to the mullahs’, explaining that doing business with Tehran would only fuel the regime’s malign activities at home and abroad.

Elaph also reported on speeches by other dignitaries, who called on the international community to end Iran’s exportation of terrorism and sectarian violence in the Middle East.

Demonstrators expressed solidarity with the Iranian people’s uprising and the MEK’s Resistance Units at the Free Iran Rally in Berlin, according to a report from the Syrian opposition-affiliated news network Orient TV. 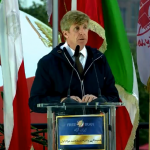 Patrick Kennedy: I Support The MEK, Because They Are Right and The Mullahs Are Wrong 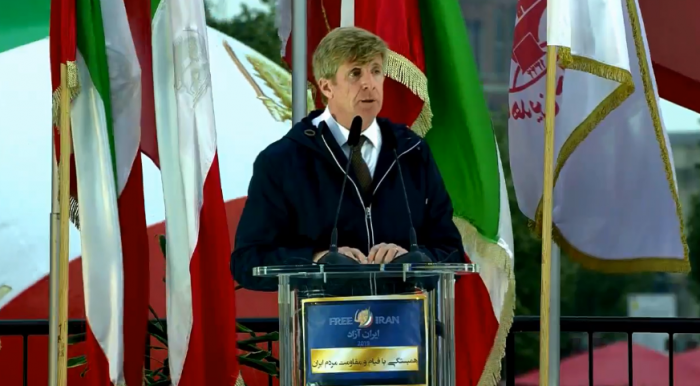 Rep. Kennedy noted the setting of the rally at the historic Brandenburg Gate and its parallels to the Iranian people’s current struggle for freedom. “We are at a historic point in history when it comes to the freedom of the people of Iran,” he said. “This is not just a problem for Iranians to solve, it’s a problem for anyone in the world who cherishes freedom and democracy and who hates the tyrannical regime of the mullahs in Iran.”

.@PJK4brainhealth:“Crimes against humanity are happening today, and it’s the mullahs in Tehran who are the fascist dictators today. Iran is the single leading nation in the world for executing their own people.
#IstandWithMaryamRajavi #FreeIran #BlackListRouhani pic.twitter.com/azISmJlUsI

“Crimes against humanity are happening today, and it’s the mullahs in Tehran who are the fascist dictators,” Kennedy said.

Kennedy expressed his support for the People’s Mojahedin Organization of Iran(MEK / PMOI) and spoke about what his experience in politics taught him about the mullahs’ attacks on the MEK: “When the MEK continues to get attacked every day, it reminds me that the mullahs cannot attack the MEK on the 10-point plan offered by Madam Rajavi, or on the assertion that Iran is the leading sponsor of state terrorism, or that the mullahs support Hezbollah and Hamas in Syria. It can’t attack the MEK because the MEK is right and the mullahs are wrong,” he said.

When the MEK continues 2 get attacked on all sides,it means that the mullahs cannot attack the MEK on the 10-point plan by @Mada_Rajavi, or on the assertion that Iran is the leading state-sponsor of terrorism,or that the regime or Iran support Hamas & Hezbollah.#BlackListRouhani pic.twitter.com/7lngVESA48

Representative Kennedy also addressed the partisan nature of support for U.S. sanctions and encouraged his fellow Democrats to look past their dislike of Trump in their consideration of sanction: “There are many on the Democratic left who believe that because they do not like Trump they have to be against sanctions on Iran…I do not believe that this is the time for us to let up on the financial stranglehold on the mullahs,” he said. “The economy is crashing, inflation is spiking. The mullahs can’t support their regime when we cut off the supply of money they use to continue to control their people. We need to keep sanctions going strong until we bring down this horrible dictatorship.”