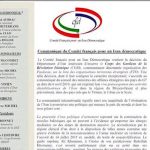 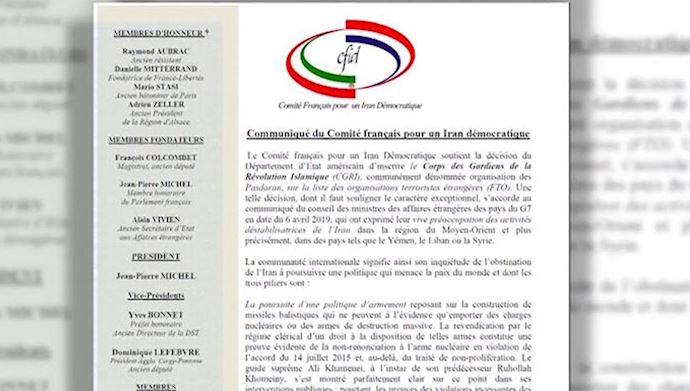 French Committee for a Democratic Iran (FCDI) recently issued a statement calling for IRGC and MOIS blacklisting in Europe.

The French Committee for a Democratic Iran (FCDI) has urged the European Union (EU) to join the United States government in designating the Iranian regime’s Revolutionary Guards (IRGC) as a foreign terrorist organization. They also urged the EU to go one step further and include the Iranian Ministry of Intelligence (MOIS) on their terror blacklist.

The Regime’s Pillars of Repression

The Iranian regime uses the IRGC as a repressive organ. Its agents stifle public dissent. Following the nationwide uprisings in 2018, in which protests spread rapidly across Iran’s 31 provinces, the IRGC was instrumental in crushing dissent. It arrested thousands of protestors, more than 14 of which died in IRGC custody after being subjected to torture.

By including the IRGC on the EU’s terror blacklist, it would severely limit the organization’s ability to raise funds. The IRGC controls more than 90% of the Iranian economy. Its inclusion on a terror blacklist would essentially put any international company or government trading with its shell companies in violation of terror financing laws.

The European Union is called upon to take meaningful measures against #Iran's terror machine.#BlackListIRGC#BlackListMOIShttps://t.co/671252pjcj

The FCDI also wants to see the MOIS added to the EU’s list of terror organizations. There is strong ground for it to do so. The MOIS has been responsible for the Iranian regime’s surge of state-sponsored terror attacks in 2018.

The MOIS planned terror attacks in the US, France, and Albania. On one occasion, an MOIS agent posing as a diplomat at the regime’s embassy in Vienna provided a Belgian-Iranian couple with homemade explosives and instructed them to detonate a bomb at the annual Grand Gathering of the Iranian opposition group, the People’s Mujahedin Organization of Iran (MEK) in Paris.

The plot was thwarted by Belgian officials; however, the regime put more than 100,000 lives at risk, including that of President Trump’s personal lawyer and former New York Mayor Rudy Giuliani who was in attendance.

The Regime Poses a Threat to the Region and Beyond

In a statement, the FCDI reiterated the threat the IRGC poses to the Middle East region and beyond. It reminded the EU that the IRGC proxies are active in Syria, Yemen, and Lebanon, destabilizing peace and contributing to the deaths of civilians and international forces.

Iranian people and resistance welcome the #FTO listing of IRGC. It has been their demand 4 many years. Because #IRGC is regime’s only leverage to advance suppression inside the country & terrorism outside.#IRGCTerrorists #BlackListMOIS@USADarFarsi #Iranhttps://t.co/K16eUUNWDW pic.twitter.com/SqJpUetQJm

“Tehran also sacrifices the Iranian people’s legitimate needs for the sake of providing the heavy expenses of expanding its nuclear apparatus and fueling its destructive foreign adventurism,” it added. “This regime is oppressing the Iranian people’s most basic necessities and is deaf to the younger generation’s freedom-loving demands.”

However, the FCDI added that the Iranian people have a beacon of hope. The MEK is active across the country. Its resistance units work tirelessly to oppose the regime’s violence and brutality and bring democracy to Tehran.

The FCDI concluded by calling on all democratic nations to offer their support to the alternative to the Iranian dictatorship, the NCRI, and its President-elect Maryam Rajavi.