Posts Tagged ‘Committee of Parliamentarians for a Free Iran (CPID)’ 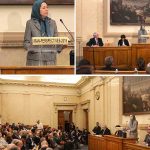 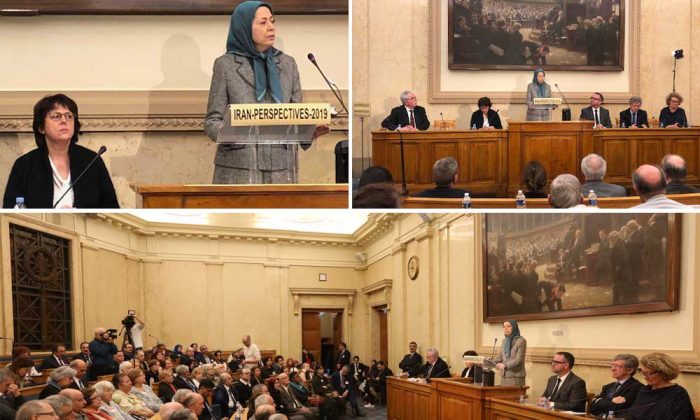 Maryam Rajavi, the president-elect of the Iranian opposition (NCRI), addressing a conference at Colbert Hall at the French Parliament -February 21, 2019

On Thursday, the Committee of Parliamentarians for a Free Iran (CPID) organized a meeting in the Colbert Hall at the French Parliament on the Iranian people’s fight for freedom. The meeting’s purpose was to chart Iranian human rights abuses and the role the clerical regime plays in state-sponsored terror and explore the role the French Government can play in the Iranian people’s journey towards a democratic Iran.

A Dire Situation in Iran

Andre Chassaigne opened the speeches with a scathing review of the Iranian regime’s human rights record. “The human rights situation in Iran is catastrophic,” he said, “between 2013 and 2019 more than 3,600 people were executed.”

#BreakingNews–#French MPs holding a conference at the #AN, at presence of @Maryam_Rajavi leader of #Iran opposition, discussing regime's terrorist activities in #Europe, its meddling in the region& the continuous #HumanRightsViolations.#FreeIran #IStandwithMaryamRajavi pic.twitter.com/bKQtfWE6Kn

He lamented the fate of Iran’s lorry drivers. “During last year, at least 268 lorry drivers were arrested in Iran,” he said, referring to the string of lorry drivers’ strikes that saw protestors arrested and threatened with death sentences for their involvement in the protests.

MP @Sonia_Krimi at #Paris Conf. at #AN:"I am a member of this country who knows what #WomensRights, freedoms and #HumanRights mean. I have known the lack of freedoms in my old country. We must hear this call to democracy."#FreeIran #FreeIranWithMaryamRajavi pic.twitter.com/tMJoOwj89q

When Member of the French Parliament, Mr. Herve Saulignac took the floor, he outlined the regime’s involvement in murders on European soil. “It’s necessary to have a demanding approach to the regime,” in the wake of the regime’s violent and nefarious schemes on French soil. “But the strength of France is to stand alongside the Iranian people and their aspirations for a free Iran”, he stressed.

MP @hsaulignac:The #EU says that it is likely that the Iranian regime is involved in murders on #European soil & that it's necessary to have a demanding approach to the regime.But the strength of #France is to stand alongside the ppl 4 #FreeIran#ExpelIranDiplomatTerrorists #AN pic.twitter.com/TSoZb1MPJg

In June last year, the Iranian regime plotted to detonate a car bomb in Paris at the annual Grand Gathering of the People’s Mujahedin Organisation of Iran (MEK), a prominent Iranian opposition pro-democracy group. The would-be assassins, a Belgian-Iranian couple traveling to the event in an explosive-laden vehicle, were apprehended by European authorities en-route to Paris.

The Need for Firm Action

The mullahs are badly in need of political and commercial relations with Europe. Nonetheless, they cannot forgo terrorist operations in the heart of Europe BC they are much weaker than is conceived; they do not know of any other way but to suppress and to create crisis. #Iran pic.twitter.com/UjSc12GoLC

She argued that the regime today is in a vulnerable state. “The mullahs are badly in need of political and commercial relations with Europe. Nonetheless, they cannot forgo terrorist operations in the heart of Europe… they are much weaker than is conceived,” she said.

She described how MEK resistance units are mobilizing the Iranian people and Iran’s “younger and freedom-loving generation.” She added they “have spread their anti-regime activities to dozens of cities across the country.”

Member of the Parliament, Frederic Reiss followed Maryam Rajavi at the podium and pledged his support to the Iranian people’s cause. “You have our support,” he said. “The Iranian people deserve Freedom and Democracy,” he added.

MP Frédéric Reiss #Paris Conf #AN:"Dear Pres.@Maryam_Rajavi, you represent the alternative &you have our support. There is a question about the #EU which continues to believe in the virtues of dialogue,but I support the fight for freedom in #Iran #DirectAN #IStandWithMaryamRajavi pic.twitter.com/sasdbnpaa9

Ingrid Betancourt, the Columbian politician, accused the regime in Iran of “practicing two kinds of terrorism”. “Hard terrorism,” she said,” to kill, and mild terrorism, to dis-inform and slander the NCRI and the resistance(The MEK).”

Tahar Boumedra echoed Ingrid Betancourt’s sentiments. He denounced the regime’s use of the Western media to spread lies and disinformation. “The media should apologize for their wrongdoings,” he added.

Boumedra went on to call for a UN investigation into the regime’s crimes against humanity, including its execution of 30,000 political prisoners in the summer of 1988.

Ms. @MdeVaucouleurs at "Future of Iran in 2019" Conf: #NCRI's goal is not2 monopolize power in #Iran, but to hand it over to the people and for that it has been structured and has a program. #AssembléeNationale #Paris #FreeIran #IStandWithMaryamRajavi @francediplo_EN @USAdarFarsi pic.twitter.com/GbwcSZyx4J

Madame Vaucouleurs, the president of the CPID, closed out the speeches. She concluded the event by welcoming the committee’s progress, particularly its decision to meet with victims of repression at the hands of the Iranian regime. Her final words were to reiterate that the goal of the MEK and its allies, “is not to monopolize power in Iran, but to hand it over to the people for that it has been structured and has a program.”