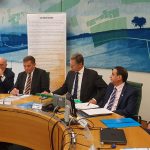 The British Committee for Iran Freedom, (BCFIF) condemns the regime’s bloody crackdown on protests in Iran-

On December 20, 2019, four lawmakers from the UK House of Commons and the House of Lords released a Press Statement concerning a joint statement by the British Committee for a Free Iran the International Committee of MPs for a Democratic Iran, announcing support of over 200 Parliamentarians from 14 European countries for Iran protests and expressed their solidarity with the Iranian resistance.