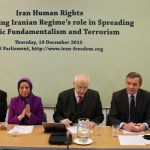 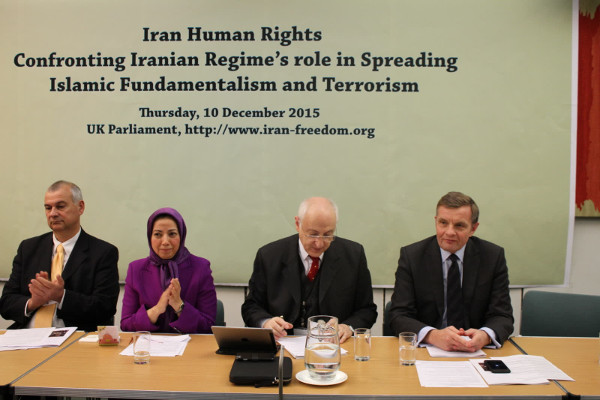 The British Committee For Iran Freedom (BCFIF), consist of dignitaries and Parliamentarians in UK, that support a free and democratic Iran during a conference on the occasion of the Human Rights Day in London-December 10, 2018

The British Parliamentary Committee for Iran Freedom recently added its name to the list of those supporting the decision by the Albanian government to expel two Iranian diplomats from its borders.

The group of MPs released a letter applauding the unprecedented move to expel the Iranian regime’s ambassador to Albania and another regime diplomat and further calling upon the British government to “publicly extend support to the Government of Albania and to work with other EU member states to thoroughly investigate and expose the danger of Iran’s diplomatic missions supporting and engaging in terrorism in Europe, in particular against Iranian dissidents and pro-democracy activists. Those found involved in such act of state-sponsored terrorism by the regime in Iran must be prosecuted and expelled from European territories.”

In December, the Albanian government announced that they had expelled Iranian regime Ambassador

Gholamhossein Mohammadnia and another Iranian diplomat because of their “involvement in activities that harm the country’s security” and “violating their diplomatic status.”

U.S. officials were quick to support the measure by Albanian Prime Minister Edi Rama. U.S. National Security Advisor John Bolton, who is a longtime supporter of the MEK, issued the first public words of support for the expulsion of the regime’s diplomats. He tweeted: “Prime Minister Edi Rama of Albania just expelled the Iranian ambassador, signaling to Iran’s leaders that their support for terrorism will not be tolerated. We stand with PM Rama and the Albanian people as they stand up to Iran’s reckless behavior in Europe and across the globe.”

His tweet was soon followed by another message of support by U.S. Secretary of State Mike Pompeo, who tweeted: “European nations have thwarted three Iranian plots this year alone. The world must stand together to sanction Iran’s regime until it changes its destructive behavior.”

The British MP’s statement detailed the numerous attempted terrorist attacks by the regime and its operatives against the MEK and the Iranian Opposition that have been thwarted over the past year. Since March 2018, regime agents have been arrested for espionage or attempted terrorism in Albania, Belgium, the United States, and Norway.

According to the statement: “The surge of terrorist activities and espionage by Iran’s regime against dissidents and the NCRI in 2018 comes amidst growing popular dissent and anti-regime protests in Iran, which senior Iranian officials blame on the opposition movement, the NCRI, and the PMOI.”

The statement goes on: “These foiled plots show that the Iranian government has taken a decision to use its embassies and diplomats to plan and carry out terrorist activities and espionage on European soil, especially against those who oppose the theocratic regime, in clear breach of international law.”

The British MPs conclude: “The Albanian decision to expel Iranian diplomats sends the right message to Iran, the world’s leading state sponsor of terrorism, that European countries will not accept such unacceptable and illegal behavior by the regime”.