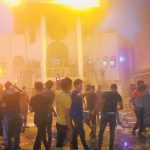 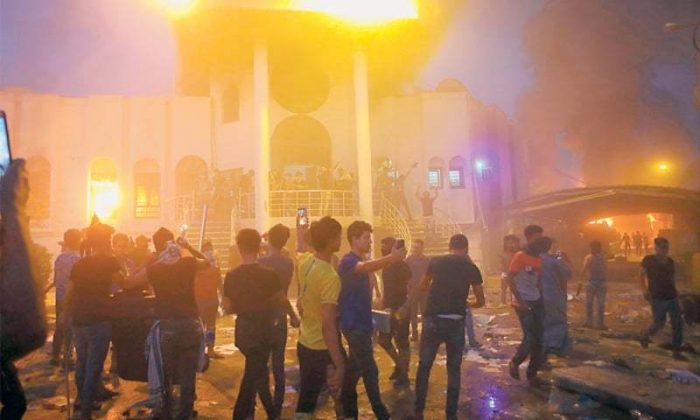 On Friday, hundreds of Iraqi protesters stormed the Iranian consulate in the southern province of Basra, setting fire to the building. Protests have been raging in Basra for the past four days and have become increasingly violent, with at least ten deaths reported so far.

The protesters gathered outside of the Iranian consulate on Friday night, chanting, “Iran, out, out!” They then rushed the building, setting it aflame and burning an Iranian flag.

The demonstrations are in response to systemic government corruption, rampant unemployment, and insufficient public services. Many residents of Basra, which has a mostly Shiite population, blame Iranian-backed political parties for interfering with Iraqi politics. The Iraqi people consider the Iranian regime’s proxies responsible for the city’s mismanagement and poor public services.

#BREAKING
An image of the #Iran'ian regime's consulate in Basra, set ablaze by angry Iraqi protesters.
The Iraqi people are chanting:
"Iranian regime, out, out" pic.twitter.com/lj3CnuisrX

The Iranian consulate is located in the upscale neighborhood of al-Bardaiya, southeast of the center of Basra. There were additional reports of protesters marching toward the city’s presidential palaces. Protests have been taking place in Basra and other cities in Iraq’s oil-rich southern Shiite heartland since July.

The Details of the #Iran Regime Meddling in #Iraq. https://t.co/sUdHav8Yhv pic.twitter.com/1P4104RBgq

Conflicting reports have emerged about the number of casualties that have occurred since the protests began. At least ten protesters were killed in clashes with security forces since Monday. Three of the protesters were shot by security forces on Thursday night during a skirmish in which protesters threw Molotov cocktails into a government building and Shiite militia offices, setting them ablaze. Other reports say that both police and civilians have been killed in the protests. Iraqi Prime Minister Haider al-Abadi has ordered an investigation into the violent protests, which are still ongoing.

The temporary head of Iraq’s parliament, the eldest lawmaker, called an emergency meeting to address the escalating protests.

Bahram Ghasemi, Iran’s foreign ministry spokesman, condemned the attack on the consulate. He said that none of the staff had been injured so far but that the building was significantly damaged, according to Iranian state TV.

Earlier this week, Iraq’s newly-elected parliament held its first session since the national elections in May. The session was adjourned amid disagreements over which of its two blocs had the right to form a new government. Both blocs claimed to hold the most seats.

The new parliament must both rebuilt northern Iraq, which was devastated in the war against the Islamic State, and repair services in southern Iraq, where serious water and electricity shortages have caused protests.

A coalition led by al-Abadi and Moqtada al-Sadr is backed by the United States and Saudi Arabia, while an alliance between former Prime Minister Nouri al-Maliki and militia leader Hadi al-Ameri is supported by the Iranian regime.

Both alliances are dominated by Shiites, who have been the dominant power in Iraq since Saddam Hussein was removed from power in 2003. The largest Sunni blocs support al-Abadi and al-Sadr. The Kurdish parties have not chosen a side.

The Grand Ayatollah Ali al-Sistani, a spiritual leader from the Shiite community, condemned the violence against peaceful protesters during the Friday prayers sermon and called for the speedy formation of a new government that can effectively manage the challenges facing Iraq.

The MEK and the Iranian opposition leader, Maryam Rajavi,  have long opposed the Iranian regime’s policy of expansionism and meddling in Iraq.

Daesh'sgrowth is product of 2 developments in the region: Iran's meddling in Iraq, suppression of Syrian dissidents by Assad #Iran #IWD