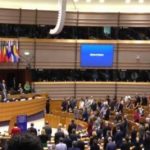 On Monday, 35 Members of European Parliament (MEP), including the parliament’s Vice-President, submitted a statement to EP President, Antonio Tajani, opposing the April 10th meeting on the floor of Parliament organized by a pro-Iranian regime MEP. The meeting, entitled “Mojahedin-e Khalq (MEK) Threat in Albania” was organized by Portuguese MEP Ana Gomes and is part of the most recent smear campaign against the People’s Mojahedin of Iran (PMOI) or Mojahedin-e-Khalq (MEK) by the Iranian ruling regime.

The meeting was held as Iran’s regime continues to push back against the PMOI/MEK after a large-scale uprising in Iran in December 2017/January 2018.  The regime placed the blame for the uprising on the PMOI/MEK, which organized the demonstrations. The regime is also still angry about the successful relocation of almost 3,000 PMOI/MEK members from camps in Iraq to Albania in 2016 and has launched a new campaign to spread false and malicious information about the main opposition in an attempt to discredit and demonize the organization.

Among the invited guests to the April 10th meeting was Anne Singleton, who was recruited to Iran’s Ministry of Intelligence and Security (MOIS) specifically to vilify the PMOI/MEK. She was previously denied the opportunity to stage similar meetings in European and British parliaments. She also traveled to Iraq several times to spread false information about the PMOI members residing in Iraq at Camps Ashraf and Liberty.

The PMOI/MEK refugees have since been relocated to Albania, prompting the Iranian regime to use their proxies to attack their credibility there in a continued attempt to demonize the organization.

The MEPs said in their statement, “[W]e were shocked to learn of a meeting to be held on 10 April in the European Parliament titled ‘Mojahedin-E Khalq (MEK) Threat in Albania’ with the attendance of several well-known agents and lobbyists of the regime. The news of this meeting has been publicized in several websites affiliated to the Iranian Ministry of Intelligence (MOIS).” 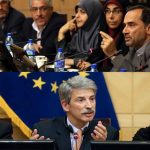 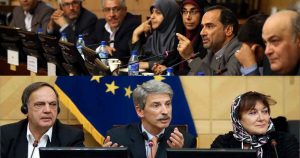 The Iranian regime’s animosity toward the People’s Mojahedin of Iran (PMOI/MEK) is well-established. On April 8, Struan Stevenson, Coordinator of the Campaign for Iran Change (CIC), reported that the regime is using the European Parliament as political cover for further action against PMOI/MEK members in Albania.

The Iranian refugees were relocated from Camp Ashraf and Camp Liberty in Iraq after an extended campaign by supporters in the U.S. and Europe in an effort to protect the MEK camp residents from continued attacks coordinated by the Iranian regime. Iran’s mullahs were enraged by this action, having waged a longstanding smear campaign against the PMOI/MEK to delegitimize the resistance organization and prevent their safe relocation to Albania.

Now the regime is pushing back against the PMOI/MEK again after a nationwide uprising in Iran in December 2017/January 2018. The Agence France-Presse (AFP) reported that on January 2, 2018, President Hassan Rouhani called French President, Emmanuel Macron, and accused the PMOI/MEK, currently based in Paris, of organizing the uprising. In this call, Rouhani asked Macron to take action against the PMOI/MEK and Mrs. Maryam Rajavi, leader of the Iranian opposition. President Macron declined this request. On January 9, 2018, Ayatollah Ali Khamenei, the Supreme Leader, officially acknowledged the PMOI’s role in the uprising and implicitly threatened the protesters who were arrested during the demonstrations with execution.

The regime’s appointment of Gholam Hossein Mohammad Nia and Mostafa Roodaki, two senior officials of the Iranian Ministry of Intelligence (MOIS), as the ambassador and first secretary of the embassy in Tirana, is a troubling development. Tehran is currently using them, along with the Habilian Center and the Didban Institute, to vilify the MEK. Both of these organizations are flimsy covers for branches of the MOIS in Albania. Albanian citizens have been recruited by these groups to demonize the PMOI through media outlets they have purchased.

More disturbingly, on March 22, 2018, two Iranians were arrested by Albanian police after evidence was uncovered that they were possibly preparing terrorist acts. Ten more people were questioned about their involvement, and the MEK was listed as a potential target of their plot.

The threat to the safety of PMOI/MEK members continues to grow as the Iranian regime repeats its strategy of vilification of the resistance group. Past campaigns have led to multiple deaths and assaults on the PMOI/MEK. Two Iranian dissidents were assassinated in Turkey and the Netherlands in 2017, and new threats against the PMOI/MEK activists were uncovered in 2017 and 2018 by Western security services.

The next stage of the smear campaign against the Iranian opposition is set to occur on April 10, 2018. Ana Gomes, a pro-Iran Portuguese MEP, has scheduled a meeting in European Parliament titled “Mojahedin e-Khalq (MEK) a threat in Albania.” Ms. Gomes’ history of animosity toward the PMOI/MEK dates back to April 2007, when she introduced a series of resolutions to European Parliament which would have endangered the residents of Camp Ashraf and Camp Liberty. Her actions were criticized by members of both the European and British parliaments at the time and ultimately failed.

Ms. Gomes has continued to make false and malicious statements about the PMOI/MEK and to meet with pro-Iranian regime groups.  She has invited Anne Singleton (Khodabandeh), an Iranian agent exposed by a US Pentagon & Library of Congress report in December 2012, to speak at the upcoming meeting in European Parliament. Singleton has a history of working with the Iranian regime to defame the Iranian opposition.

Other invited speakers at the April 10th meeting include Olsi Jazexhi and Migena Balla, a pro-Iranian regime couple from Albania, and Vanna Vannuccini, an Italian journalist currently living in Iran who is a staunch supporter of the Islamic Republic of Iran. 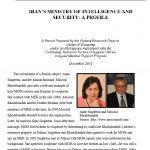 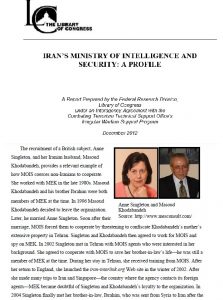 On Wednesday the International Committee In Search of Justice (ISJ) reported that the Iranian regime has launched a new campaign against Iranian refugees living in Albania. This campaign is the latest effort by the ruling regime in Iran to demonize and suppress the MEK, the principal opposition movement in Iran. The ISJ is concerned that these actions on the part of the Iranian regime could lead to a violent attack by Tehran.

The refugees are members of the People’s Mojahedin Organization of Iran (PMOI or MEK), an opposition group that fled Iran’s oppressive regime to escape persecution, imprisonment, torture, and death at the hands of the ruling mullahs. The MEK is the largest and most popular Iranian opposition organization and has the goal of bringing democracy and equality to Iran. Because of this, the MEK has been the primary target of the theocracy’s ire. Over the past 30 years, the regime has killed over 120,000 MEK members in its efforts to suppress and demonize the resistance organization.

Iranian refugees in Albania, former residents of Camp Ashraf and Liberty in Iraq

Many of the Iranian refugees in Albania are former residents of Camp Ashraf and Camp Liberty in Iraq. The Iranian regime waged a years-long series of attacks on MEK members in these camps, cutting off access to food and medical supplies and coordinating deadly air raids. 178 camp residents died as a result of these attacks.

In response to the continued assaults on Iranian refugees in Iraq, an international campaign to protect and relocate MEK members in Iraq was mounted. Thanks to the bipartisan efforts of American dignitaries, U.S. Senators, and Congressmen, European politicians, members of the European and national Parliaments and international entities including the United Nations, the remaining residents of Camp Liberty were finally moved to locations outside of Iraq, with the largest number settling in Albania.

A series of demonstrations took place in Iran in December 2017-January 2018. Protesters chanted, “down with [Supreme Leader] Khamenei,” and “down with [President] Rouhani” in demonstrations in 140 cities across Iran. The fundamentalist regime was rattled by this uprising and acknowledged that the MEK played a large part in organizing the protests.

The Iranian regime has now focused its efforts on the Iranian refugees in Albania. Two Iranians were arrested on March 22 by Albanian police for espionage and attempting to gather intelligence about the refugees. Similar actions in the past have often lead to terrorist actions, so these arrests are cause for concern.

In addition, the Iranian regime is once again disseminating misinformation about the MEK in an attempt to undermine its efforts to bring regime change to Iran. It is currently preparing actions in the European Parliament to demonize the MEK.

British national Anne Singleton is currently being used by Tehran to sow disinformation about the MEK. She and her Iranian-born husband Massoud Khodabandeh were recruited by Iran’s Ministry of Intelligence and Security (MOIS) in 2002, according to a Pentagon-commissioned report released in December 2012. They have since led numerous efforts to demonize the MEK. Singleton has traveled to Iraq and Albania several times as part of the smear campaign on the Iranian refugees. She attempted to spread false information about the MEK in front of British Parliament in September 2005 but was disinvited after protests from Members of Parliament. She is now scheduled to speak next week at the European Parliament to make more false allegations against the MEK.

The ISJ expressed grave concern about these events, fearing that they will lead to more assaults on MEK members in Albania. The organization urges authorities to take action against the ruling regime to prevent them from endangering the refugees and security in Europe as well.