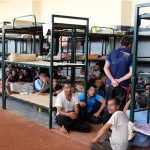 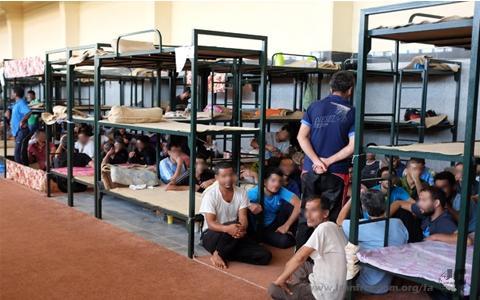 Fashafoyeh Prison, one of the most horrific prisons in Iran.

In Greater Tehran’s Fashafoyeh Prison, twenty-three prisoners convicted of theft are awaiting hand amputations, with one prisoner expected to undergo the procedure in the next few days.

Alireza Khan Baluchi, convicted of theft seven years ago, has had his case sent to the Sentence Implementation Department, which will carry out the forced amputation. Baluchi has already returned the stolen property to the victim.

#Iranians are sentenced to amputation for petty thievery while state corruption has been institutionalized in the regime with officials citing numerous cases.https://t.co/ixd70kV8Gu

Baluchi is not alone. Across Iran, every year convicted criminals receive harsh sentences of lashing and amputation for petty crimes. Between 2007 and 2011, the Iranian regime sentences 215 thieves to amputation sentences. It carried out around 125 of those sentences, six of which took place in public. Most of those who receive amputation sentences have been convicted on charges of stealing property worth 10 million tomans or less (US$600).

The regime’s attorney general is a fierce supporter of the barbaric practice. Following the regime’s decreased use of amputation as a punishment in the wake of the heavy international backlash, Attorney General Mohammad Jafar Montazeri called the decline “unfortunate”.

“One of the mistakes that we make is that we are afraid of human rights (propaganda) and that they say that you treat thieves violently,” the attorney general said in a meeting with police commanders in January.

He cited this reluctance to administer amputations as punishment as an underlying reason why theft had increased on the previous year’s levels. “According to the statistics of the judiciary and the police, unfortunately, robbery is second in terms of crimes in the society,” Montarezi claimed, asserting that theft now accounted for 28% of all crimes committed in Iran.

Unemployment is a Far Greater Driver

While the attorney general would prefer to blame an increase in crime on softer punishments, the country’s economic decline is a far greater driver of theft. With inflation skyrocketing, the purchasing power of Iranians plummeting and unemployment on the up, many parents are resorting to extreme measures to keep food on the table.

In the same interview, Montarezi seemed to acknowledge the role economic hardship has within Iran’s increasing crime rates. He cited the countries rising unemployment and widespread factory closures as areas of concern.

The Iranian regime last removed someone’s hand as a punishment for theft in January 2018. The victim, identified only as Ali, was sentenced to amputation by guillotine for the crimes of stealing livestock and other items from villages in Northeastern Iran.

International human rights’ groups, including Amnesty International, were quick to condemn the sentence. Magdalena Mughrabi, the Deputy Middle East and North Africa Director for Amnesty said: “Meeting out such unspeakably cruel punishments is not justice and serves to highlight the Iranian authorities’ complete disregard for human dignity. There is no place for such brutality in a robust criminal justice system.

The internal population within Iran also responded to the forced amputation with public outcry. People took to the streets to protest the injustice, which the head of the Khorasan Razavi judiciary defended as a “divine punishment”.

When challenged in the UN Human Rights Council on the issue in 2010, Mohammad Javad Larijani also defended the practice as “culturally and religiously justified.”

There is no justification for the Iranian regime and its abhorrent acts of violence. Forced amputations are a barbaric practice whenever they occur.