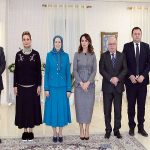 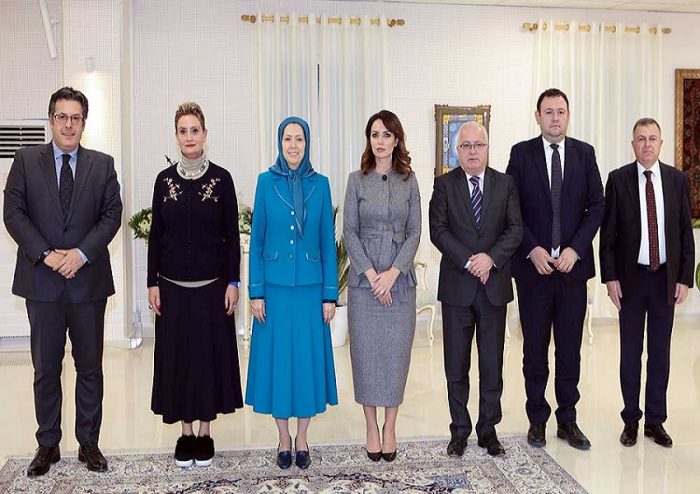 An Albanian Parliamentary delegation, lead by Deputy Chairman of the Parliament Edi Paloka, met with Maryam Rajavi, the President-elect of the Iranian opposition-December 4, 2018

On Tuesday, Mrs. Maryam Rajavi, President-elect of the National Council of Resistance of Iran (NCRI), met with a delegation from the Albanian parliament outside of Tirana. The delegation was led by Edi Paloka, Deputy Chair of Albanian Parliament. Other members of the parliamentary delegation included Mr. Edmond Spaho, Mr. Endri Hasa, Mr. Xhemal Gjunkshi, Ms. Grida Duma, and Ms. Valentina Duka.

Demonstrations and protests by various social strata have been continuing and expanding. The majority of the people of #Iran live below the poverty line, and unemployment, inflation, and corruption are rampant. So, the people of Iran are determined to achieve their freedom. pic.twitter.com/PfNiAdJsn2

The delegation met with Mrs. Rajavi to hold talks about the Ashraf 3, the MEK camp in Albania, and to discuss the anti-regime protests and strikes currently taking place in Iran.

During the meeting, Deputy Chairman Paloka said, “Not only we in the parliament but all the people of Albania are happy with the presence of the PMOI in this country.”

Grida Duma reiterated this point, saying, “It is a pleasure for us to welcome you and say that all of us in Albania support your presence here because you represent the values of freedom and democracy. You have revived the original humanitarian principles of Islam and stood up to religious coercion.”

Edmond Spaho described reasons why the MEK has gained support from the international community: “Your courage, resolve and perseverance is a historical example and this is why international support for your resistance grows by the day.”

Valentina Duka thanked Mrs. Rajavi and the MEK “for all the good work you have done for Iran’s freedom and particularly for women’s rights.”

Endri Hasa said, “We actively support your movement,” noting that he follows news of the Iranian uprisings.

Xhemal Gjunkshi also expressed his support of Mrs. Rajavi and the MEK, saying, “My colleagues and I support you and we wish that you succeed in reaching your ultimate goal which is Iran’s freedom.”

Mrs. Rajavi welcomed the delegation of Albanian MPs and thanked the Albanian parliament, noting that the MEK had received strong support from the ruling party as well as the opposition parties. Rajavi emphasized, “Demonstrations and protests by various social strata have been continuing and expanding. Although Iran is a rich country, the majority of the people of Iran today live below the poverty line, and unemployment, inflation, and corruption are rampant. So, the people of Iran are determined to put an end to this situation and achieve their freedom.”

Mrs. Rajavi closed the meeting by expressing her hope that the ultimate victory of the Iranian Resistance would bring an end to the mullahs’ terrorist acts and hostility and usher in a new era in the relationship between Iran and Albania.