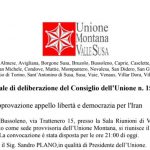 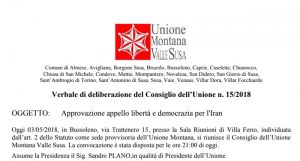 Twenty-two Italian municipalities from the Piedmont region signed a statement in support of the Free Iran rally that is scheduled for June 30th in Paris. The statement was written following a regional Mayors’ council meeting in Italy’s Vale De Susa on Friday, June 1, 2018, in which the statement was discussed and approved by those in attendance.

The statement is an expression of solidarity for the Iranian people and their widespread uprising against the repressive ruling regime. The uprising, which began in December 2017, took place in 140 cities across Iran for two weeks before being temporarily suppressed by the regime. The people staged their initial protests to express dissatisfaction with current economic conditions, but as the uprising spread, the people began to call for regime change and nothing less. Protests were widely publicized with the help of social media, and the international community became aware of the unrest.

The statement by Italian municipalities acknowledged the validity of the resistance movement, which includes the MEK, and declared support for Mrs. Maryam Rajavi’s 10-point plan for democratic change in Iran. Mrs. Rajavi is the President-elect of the National Council of Resistance of Iran, of which the MEK is the largest member. The statement said:

“We support NCRI’s President-elect Mrs. Maryam Rajavi’s 10-point plan, which is aimed at setting up a democratic republic based on separation of religion and government, gender, ethnic and religious equality, non-pursuing any nuclear program, abolition of death penalty, peaceful coexistence and commitment to international rules and conventions, to ensure democracy, development and progress in Iran and the world.

“It’s time for the international community to put itself on the right side of history.”

The statement went on to express support for the upcoming Free Iran Grand Gathering, which will take place in Paris on June 30th. The annual event is intended to promote the resistance movement in Iran and to support the people’s desire to overthrow the oppressive theocracy currently in power and replace it with a secular democracy.

The statement also referred to the Iranian regime’s massacre of 120,000 political prisoners, including 30,000 in the summer of 1988 alone, most of whom were MEK members. The following is from the statement:

“Amnesty International has regarded the massacre as a crime against humanity, calling for its perpetrators to be brought to justice. According to UN reports, the Iranian regime has the highest per capita execution rate in the world.

“The Iranian people showed the world that they’re more than willing to join their organized resistance and pay the price for democratically changing the ruling dictatorship in Iran and replacing it with a system that is based on separation of religion and politics.

“We hereby express our solidarity with Iranian people’s uprising for freedom and democracy and also declare our support for NCRI’s program for a democratic change in Iran.

“We ask the international community to make its relations with the Iranian regime conditional on the regime’s respect for human rights, and also ask with a loud voice for the release of all political prisoners in Iran.”