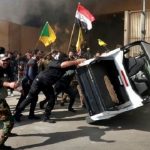 Iran’s Attack on US Embassy ‌‌‌Backfires

Written by Esmail Mohades on January 3, 2020. Posted in NEWS 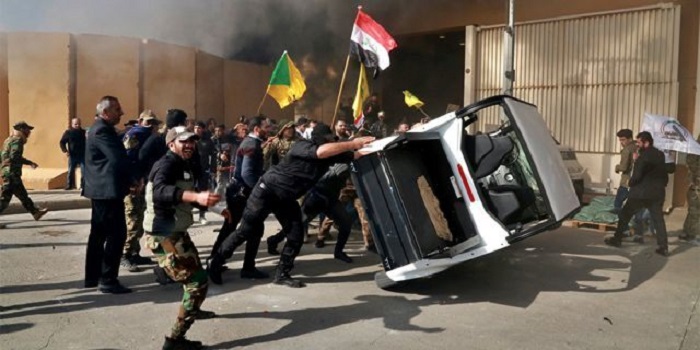 US Embassy in Iraq was targeted by Iran proxy forces on December 31, 2019.

The attack on the American embassy in Baghdad was led by infamous agents of the mullahs’ regime in Iraq, including Abu Mahdi Al-Muhandis, commander of the  Kataib Hezbollah; Hadi Al- Ameri, commander of the terrorist Badr Corps; Faleh Fayyad al-Qaisi, and Nawaz al-Qaisi chief Al-Haq.

Jafarzadeh from NCRI: What we have seen in Baghdad is not an isolated act. It comes as a result of a series actions. In one word, the raid on the US embassy could not have happened without the direct order by the Iranian regimehttps://t.co/1PMkVS0gAl#Iran #Iraq @USAdarFarsi pic.twitter.com/RAljthAWud

“Iran killed an American contractor, wounding many [in an earlier attack]. We strongly responded, and always will. Now Iran is orchestrating an attack on the US Embassy in Iraq. They will be held fully responsible. In addition, we expect Iraq to use its forces to protect the Embassy, and so notified!”

While US Secretary of State Mike Pompeo tweeted:

“The attack today was orchestrated by terrorists – Abu Mahdi al Muhandis and Qays al-Khazali – and abetted by Iranian proxies – Hadi al Amari and Faleh al-Fayyad. All are pictured below outside our embassy.”

The Iranian regime wanted to distract international attention from the uprisings of both the Iranian and the Iraqi people, which sought nothing less than the total expulsion of the regime from their countries to end corruption. In fact, all the mullahs have done is to increase the number of people calling for their removal from the region as a whole.

That’s why they’ve launched 11 attacks on US troops in Iraq since November, although the previous ones were more cautious, hitting around the bases as opposed to making a direct hit.

On December 26, Iran hit the US K1 base in Kirkuk, killing an American contractor and injuring several US soldiers, which is when the US launched an airstrike on seven Iran-backed Iraqi Kataib Hezbollah garrisons.

So, Iran hit back by attacking the embassy in order to maintain the support of its suppressive forces.

The National Council of Resistance of Iran (NCRI) wrote:

“This dilemma and a new wave of the crisis have aggravated the regime’s infightings. The proponents of either option accuse the other that the alternative would lead the regime to its destruction and ultimate downfall. Therefore, as the regime enters a new phase of tension with the United States, its crises of imminent downfall, which has entered an irreversible phase after the November uprising, and the uprising of the Iraqi people, has shaken the regime’s pillars of existence. These crises will accelerate the ultimate overthrow of the mullahs’ regime.”