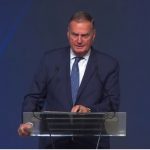 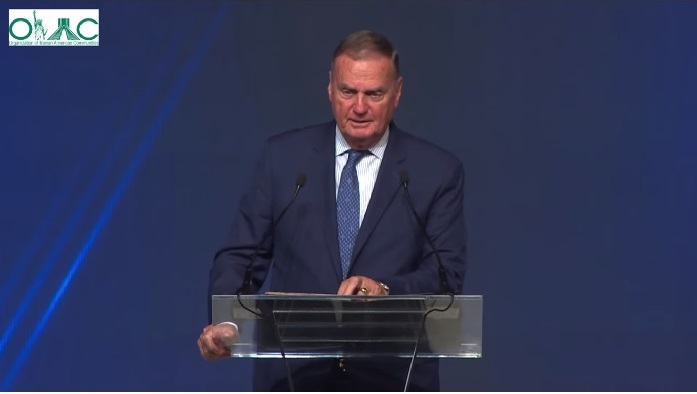 General James Jones, former National Security Adviser under President Obama, and the interim Chairman of the Atlantic Council addressed the Iranian opposition movement at its 2018 Iran Uprising Summit. He was greeted to the stage by a standing ovation amid cheers and applause from all in attendance.

Jones has been outspoken in his disdain for the Iranian regime. He recently told The National that he has little hope of the regime abandoning its export of state-sponsored terrorism and called the regime, “an existential threat to the region”.

A “Threat to Peace and Stability”

Jones began his speech by echoing these comments. He said that today, “the Iranian regime remains mankind’s most existential threat to peace and stability”.

In support of his statement, he referred to the regime’s systematic violation of human rights and interference in regional affairs.

“Tehran remains a chief antagonist of democracy and liberalization across the Middle East”, he continued. “We see the regime’s aspirations of regional hegemony graphically on display in countries like Syria, Yemen, and Iraq”.

He condemned the regime’s spread of “radical ideology” through “force and intimidation” across the Middle East. He also decried its financial support of militant and terrorist groups, including Hezbollah.

Jones was unequivocal in his belief that the US must check Tehran’s ambitions. “If the regime succeeds, the strategic implications will be grave”, he said. “The result will be more death and suffering”, he explained. He urged the United States government to remove “passivity and weakness” from its Iran policy.

Jones spoke about his time in government as the National Security Adviser. He lamented that despite his best efforts, the US government did not act quicker in coming to rescue of the People’s Mujahedin Organisation of Iran (MEK) when the regime committed crimes against its membership.

“Frankly, I regard that chapter as a glaring, and I hope atypical, failure in America’s leadership of the international human rights movement”, he said.

James Jones stressed the importance of responding to today’s challenges. He described “new obstacles”, referring to the regime’s terrorist plots against the MEK in Europe. “The regime is keeping up its efforts to silence dissidents”, he said.

Jones took the opportunity to praise those in the US government who are working to support the Iranian people. He named the current National Security Adviser to President Trump, John Bolton, and praised him for remaining “steadfast in his support” of the Iranian opposition.

He praised Donald Trump’s decision to withdraw from the Iran nuclear deal, calling it the “correct measure”, which prompted applause from those in attendance.

“The Most Enduring and Forceful Protest Since 1979”

Jones went on the praise the brave people of Iran, that have taken to the streets to express their frustration at the Iranian regime.

“We know that Iran is suffering deep economic pain… some will point to the sanctions, old and new, as the culprit but ladies and gentlemen, the true culprit is the regime”.

He also went on the describe the similarities between President-elect of the MEK, Maryam Rajavi’s ten-point plan, and the principles that America was founded on. “These are Jeffersonian principles”, he said, “that every form of tyranny fears.”

“This is what the regime fears the most and we look forward with great anticipation to the day when its fears are realized”. He acknowledged the role of the US and its allies in bringing to fruition “the kind of future that the ten-point plan promises”.

It was in this context that Jones laid out his own five strategic imperatives. The first imperative, he said, is to extensively monitor the Iranian regime’s nuclear missile program.

The second imperative is to bring an end to the conflict in Syria and end the ongoing human rights crisis that has engulfed that part of the Middle East. “Nothing would strengthen Tehran more than to maintain Syria as a proxy”, he warned.

The third strategic imperative, Jones said, is to support the Gulf community in its creation of an alliance against the Iranian regime. The fourth is to “reinvigorate the Middle East peace process”.

Jones’ final imperative is to “support the Iranian people who hunger for democracy and a government worthy of their hopes and dreams”. “That is the future we are entering”, he said, the regime’s days are numbered because the Iranian people “will not stop in their demand for a government that reflects their hopes, their dreams, and their aspirations… That is a future worth creating”.